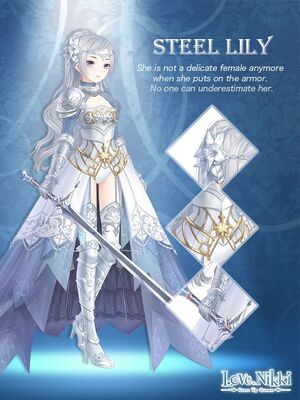 She is not a delicate female anymore when she puts on the armor. No one can underestimate her.

Steel Lily is a Pigeon suit that could first be obtained by recharging at the diamond tier of $4.99 USD or higher, from September 17th to September 23rd, 2017. It can now be bought in the Clothes Store.

The Pigeon Kingdom was a battlefield during medieval age. Everyone was struggling to survive.
– Steel Lily

Fight or flight, she chose the former to end the brutal war.
– Choice of Steel


When she wears the armor, she is never belittled with.
– Steel Armor


She's like a flower in war fire. Her special styling ability earns her the name Steel Lily.
– Lily Stockings


She was feared by her enemies, then the beautiful lily on her body looks scary to them.
– Steel Boots


Steel Lily is a legendary name in Pigeon. The Valkyrie is the hero for all.
– Steeled in Fights


The sword of hope makes her even more outstanding. She is the invincible one.
– Hope Sword


As the fire of medieval goes out, the horn of Renaissance was blown. Time to put away the armor.
– Gloves of Steel 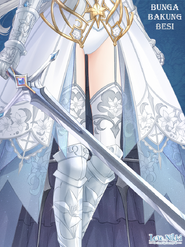 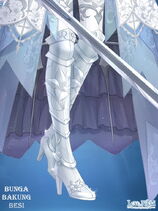 Retrieved from "https://lovenikki.fandom.com/wiki/Steel_Lily?oldid=183017"
Community content is available under CC-BY-SA unless otherwise noted.