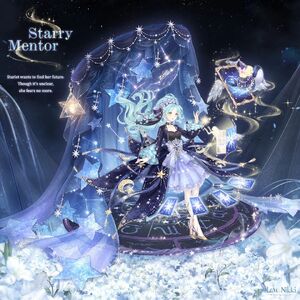 Starlet wants to find her future.Though it's unclear, she fears no more.

Starry Mentor is a Lilith suit that could be obtained through the Garden Secret event.

As the sunlight fades and the wind goes quiet, all the secrets in the mortal world are hidden in the starry night.
– Midnight Ballad

From Star Seer, Starlet knows the answer to life. When Star Seer left, she stepped on the journey again.
– Lost Heart

Starlet wants to be a person like her mentor, so she turns the astrolabe and guides the way for countless people.
– Wind Flower Tail


When she looked back and thought of those nights of pain and confusion, she was more determined to look forward.
– Star Echo


She thought of the taunts, and the moments of failure, until a soft voice rose, 'It's no big deal.'
– Prayer


The astrolabe reveals the fate hidden in mist. The seer gave the astrolabe to Starlet. Her eyes shine like stars.
– Light of Fate


That soft voice told her that fear is a knife that kills everything 'creative' and only bravery can break it.
– Night Blossom


The seer turns the astrolabe in her hands, like a small world. Starlet found another world in her eyes.
– Galaxy Poem


In that world, stars twinkle and there is always a bright star lighting up the way for her.
– Glittering Star


Star Seer lights up an eternal starry sky for Starlet. On the journey of life, it will always guide her heart.
– Guiding Star


Starlet somehow feels a bit of tired. She has covered such a long path and she could use some encouragement.
– End of Faith


They spent a long time together. At that time, Star Seer patiently taught Starlet how to read the stars.
– Waves of Night Sky


Star Seer told her the divination is to observe, discover the truth, and sees the big world from small things.
– Lost in Mortal World


Whenever she doubts, Starlet thinks of those nights and Star Seer's gentle eyes.
– Caring Eyes


The world outside has countless possibilities and every one of them is the start of a big story.
– Midnight Carnival


Starlet wants to find her future. Though it's unclear, she fears no more.
– Wind Flower Blossom


'Getting lost is not terrible if the path in your heart is clear. Your future could be like this starry sky.'
– Unknown Imagination 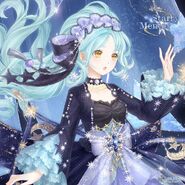 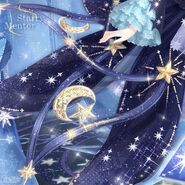 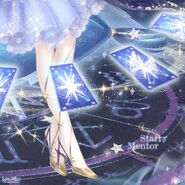 Retrieved from "https://lovenikki.fandom.com/wiki/Starry_Mentor?oldid=171839"
Community content is available under CC-BY-SA unless otherwise noted.