Starlight Psalm is a Pigeon suit that can be obtained through Recipe Crafting. It is the final suit in the series of Stylist's Arena-inspired suits, and requires the successive crafting of the previous suits Prime, Sunny's Windowsill, and Ballad for Adeline.

Lady Lolosa is a legend. She creates the climax of the Mix Match style of Lilith.
— Light of Legend

In the afternoon, Lady Lolosa's rose garden is always adorned with violin, dessert, and stylists' grace.
— Psalm of Stars

The carriages of pursuers are numerous around her house, and their love letters are as many as the rose petals.
— Numerous Carriages

The glory of Lady Lolosa is imprinted on the medal of Queen of Stylist for all the stylists later to admire.
— Unmatched Grace

The brilliant stars are dimmed by the light in your eyes, and the entire rose garden is whispering your beauty.
— Star Crown

King Sayet designed the most known style of Lady Lolosa. The inspiration was the purple roses in the morning.
— Admiration Dew

It is said that Lady Lolosa only holds golden goblets of first-class wine.
— Glowing Time

The highest title in Arena, Queen of Stylist, is granted at dawn as usual. And the metal goes with purple roses.
— Dawn Crown

'You'll either fall for Lady Lolosa at first sight or get lost later in her starry eyes eternally.'
— Starry Dream Eye

The suit describes Lady Lolosa, a woman whose clothing style becomes popular throughout both Pigeon Kingdom and Lilith Kingdom. Her "Mix Match" style was popular in Lilith, while also popularizing golden tassels, white lace, and purple roses in Pigeon. Her most well-known style, which is depicted in the suit, was designed by King Sayet, the legendary designer. Because of her status as a legend, she was imprinted on the medal of Queen of Stylist. 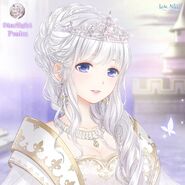