Love Nikki-Dress UP Queen! Wiki
Register
Don't have an account?
Sign In
Advertisement
in: Characters, Supporting Characters, Females,
and 4 more

ステラ（キャラクター）
Starlet is a character in Love Nikki. She is an intern wedding dress designer as well as a diviner. She is under the tutelage of the Star Seer, and though astrology was initially just a hobby for her,[1] she now works as a horoscope writer for the Amphithea Group's newspaper.[8]

Starlet has fair skin and an average frame with sleepy looking blue eyes. Her long platinum hair has a white ombre and is worn loose, ending at her knees with straightened bangs, a large curled cowlick, and several loose strands around her face. Her navel-length forelock hair is braided. Her hair usually has accessories through it.

Her attire is feminine and frilly, usually featuring a star motif and colors of blue, white, and black.

Starlet is a talented and very eccentric young woman with several personality quirks. She is haunted by bad luck and is described as "muddled" by Momo. Although she seems to have a very special view of the world itself, she sometimes makes observations that seem to be out of place compared to her surroundings. She's also quite gullible, and has nearly fallen for various scams.[12][13]

She often gets lost and find herself in tricky situations; a prime example being when Nikki and her friends first met her, she forgot her friend's wedding gift in the morning, missed her bus stop in Hela Vi, got her wallet stolen shortly thereafter and fell into a lake and almost drowned.[1] Even though she claims to have already gotten used to incidents like this, she sometimes become discouraged over all the bad things that happen to her but is quick to recover back to her kind, cheerful and friendly self.

In addition to various wedding dresses, Starlet has designed the following: 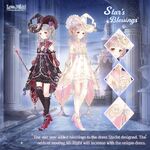 Starlet was always a fan of divination, but she also dreamed of becoming a wedding attire designer. She wanted to one day wear a wedding dress designed by herself, and was a firm believer in the idea that "each star will meet with another star someday", or that there is someone out there for everyone.[12]

Her tendency to get lost stemmed from a refusal to accept directions from people. When Starlet was young, she once took directions from a group of friends, but they tricked her into going the wrong way. She took a path into the forest that she thought was a shortcut, but only ended up more lost than before and trapped alone within the dark trees. Starlet laid there all night, where she cried herself to sleep. Only when her grandmother found her in the morning was Starlet saved.[10]

Starlet, still mistrustful of the help of others but no better at finding her way around, suffered from low self-esteem. Everywhere she went, people called her a fool or an idiot, and the taunts wouldn't leave her mind. It didn't help that every road looked the same to her, and she found her way home each day by picking at random.[10]

She lived alone, but on her birthday this year, her grandmother sent her a divination book in the mail. Reading the description of the book, she realized it could help her find her way. However, once she sat down to read it, she was still confused.[10]

Suddenly, a card flew out from the book. It was an invitation to something called the Night of Divination, and Starlet had been randomly selected to attend and have an unforgettable night in the world of divination. Starlet held the invitation in her hand and vowed to go, hoping that she could meet other diviners.[10]

Unfortunately for Starlet, the Night of Divination was in a forest, and she got lost on the way there. The doubts and hopelessness began to set in, and she sat under a tree, resigning herself to stay in the forest forever. It was just then that the Star Seer, seated in the tree, spoke to her.[10]

They sat together, and Star Seer patiently explained the stars to Starlet. She explained that every star had its own pattern, and that even though they moved, one could learn which was which and use them to navigate. She also encouraged Starlet to not see roads as right or wrong, but to simply appreciate wherever life took her, and that the direction in her heart was more important. Though Starlet wasn't sure how to find the direction in her heart, the Star Seer suggested that they could find it together.[10]

Inspired by all of her single friends, Starlet designed a suit called "Blessing of Star", and the Star Seer added magic to it in order to give it good luck. The suit had the ability to help girls find their Mr. Right. She gave it to a stranger, and it began to pass through Miraland. Once a girl wearing the dress found her Mr. Right, she would give it to another girl. It became more and more well known throughout Miraland, though Starlet herself lost track of it.[14]

Starlet first appeared as a mysterious girl interpreting her astrolabe at Hela Vi. Following the direction her astrolabe point towards, Starlet accidentally fell into a lake and nearly drowned. Fortunately Nikki and Momo were there to save her.[1] Thereafter she introduced herself as an intern wedding designer who came to Hela Vi for a wedding. She asked Nikki to take her there. But when hearing Momo's skepticism of her profession, Starlet asked Nikki to act as her model to show off a sexy and mature suit she designed.[1]

Upon arriving to Hela Vi, Starlet thanked them and invited them to the wedding. She was later cut off by her friend, Shiyin, who asked why she came so late. Starlet started crying and explaining all the bad things that happened on her way, in which Nikki, Momo and Shiyin could only reply with silence. She quickly perked up when Shiyin asked if she performed her own fortune.

Nikki, Bobo, and Momo ran into Starlet in the Republic of Wasteland near the Windvale Forest. She was in the tribe square, trying to make money fortune-telling because she lost her wallet. Unfortunately, she only knew how to do style-related fortunes and not the ones about personal life that the tribespeople wanted. Nikki saved her from the situation, and she explained she was there to travel and expand her skills.[3]

As they traveled through the Wasteland, Starlet told them about the Amphithea Group's new newspaper, Amphithea News, and how she wanted to start a divining column but was intimidated by the amount of people that would be reading it.[15] Only a short time later, a messenger of that very newspaper appeared in the Wasteland, telling them that Nidhogg was attacking Cloud City. Starlet, shocked, followed Nikki and her friends as they tried to make their way to Cloud.[16]

Nikki and her friends had trouble finding a rail line to Cloud, so Starlet offered to go back to Lilith to consult with her master, the Star Seer. She bade goodbye to them as they tried to find a way to go to Cloud City.[13]

While in Lilith, her master recommended her for the Amphithea News position, and she landed the job. Starlet attempted to navigate to Welton, even leaving two weeks early, but got lost and couldn't find the building. Nikki, Bobo, and Momo found her and helped her navigate to the head office, where the editor-in-chief expressed relief that she was not in danger.[8]