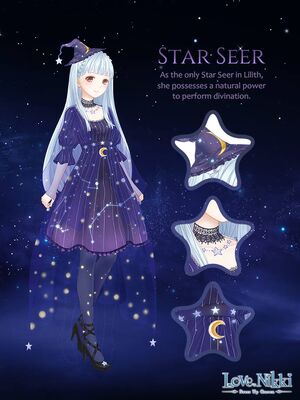 The Star Seer is a character in Love Nikki. She is a diviner from Lilith Kingdom who is highly respected by the people of Miraland. She is also Starlet's master, and teaches her divination.

The Star Seer has long white straight hair and generally wears starry-themed clothing. She wears the dress Seer's Wardrobe daily, though the dress Star Seer has a similar theme. Over the dress, she wears a sheer cloak that is fastened in the front with a moon clasp. On her head, she wears a small purple witch's hat that has a light blue star at the end.

The Star Seer is wise and mature. Unlike Starlet, who can get emotional, she has a level head. She believes that time is "like a river" and believes that having a direction in her heart is more important than finding the right path.[1][2]

The Star Seer has designed the following:

White Swan
Add a photo to this gallery

The Star Seer lives in a unique tower in Lilith Kingdom, and it's said that she was born with the ability of foreknowledge like other Star Seers.[3] Before she became a diviner and learned to read the stars, she got lost often, and didn't entirely know where her life was taking her. However, the stars helped to inspire her by showing her that there was no correct way to live.[1]

She, like the Star Seers before her, helps to guide the direction of the nation, though she does not use her divining skills often. Whenever something important is going to happen, she goes to the divination room at the top of the tower to witness the pattern the stars make.[3]

Already a powerful diviner, Star Seer attended the Night of Divination, where she met Starlet, a lost, novice diviner. Though Starlet had been struggling with her own abilities, the Star Seer offered her guidance, and from that point on Starlet became her apprentice.[1]

During this year, the Star Seer predicted Nikki's arrival to Miraland.[4] She likely has a prophecy that has more information about how Nikki would be able to return to Earth, which the Mayor of Moonlit City knew about.[5]

The Star Seer cares a lot about Starlet and her ability as a fortuneteller. She encouraged Starlet to travel, believing that staying in Hela Vi may not be allowing her to improve and reach her full potential.[6] The Star Seer recommended Starlet for her current job, working for Amphithea News as a horoscope writer.[7] She also helped her design a dress, enchanting it so that girls could find their Mr. Right.[8]

Starlet depends on the Star Seer as well and has a great deal of respect for her. She turned to her when it looked as though she, Nikki, Bobo, and Momo would be unable to reach Cloud City in time to save Lunar.[9]

The Star Seer believes strongly that Nikki holds the fate of Miraland in her hands.[10] When she first met Nikki, she was astonished at the sight of her as if she had just learned the secrets of the past and the future.[11] She told her that she was here to finish a predecessor's long-cherished wish.[12]

The Star Seer also gave Nikki gifts, including the coat Ode to Starry Night and the necklace Night of Stars.

The Star Seer works closely with Hurst, who is a diviner like her. She gave him a gift made of nebula that gave him the ability to see unusual sights, which could possibly refer to his star wheel.[2]

Retrieved from "https://lovenikki.fandom.com/wiki/Star_Seer/Character?oldid=126014"
Community content is available under CC-BY-SA unless otherwise noted.