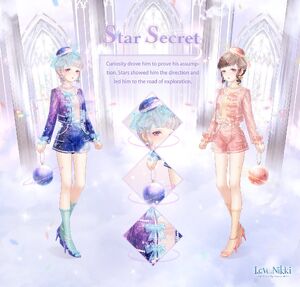 Curiosity drove him to prove his assumption. Stars showed him the direction and led him to the road of exploration.

Star Secret is an Apple Federation suit that can be obtained via the Arcane Astrolabe event.

When the elves ruled Miraland, humans feared elven magic, which could manipulate the sun, the moon and the stars.
– Sheen of Cold Moon

No one dared to question the magic of elves and the God of Nature, except the bold philosopher Perry Pat.
– Starry Galaxy

In Perry Pat's theory, the so-called unpredictable magic was only an external manifestation of some law.
– Starry Night Myth

Perry Pat thought the magic was no different from other natural laws, and elves just understood such laws first.
– The Vast Galaxy

He believed that as long as human beings found and understood these laws, they could be as powerful as the elves.
– Pearly Night Sky

His speech enraged the elves. As rulers, they did not allow any voice that might impact their dominance.
– Endless Star Sky

To keep the faith of Miraland, elves condemned him as a 'despicable man who defiled miracles' and drove him out.
– Stars Twirl

Perry Pat started his journey. He traveled during the day, and looked up at the starry sky at night.
– Blessing of Starlight

Gradually, he found that all the stars had a fixed orbit, which led him to some wild imagination.
– Starry Sky Reverie

Curiosity drove him to prove his assumption. Stars showed him the direction and led him to the road of exploration.
– Star of Neptune

During the journey, he learned astrology, mathematics from experts and asked civilians about their life experience.
– Stars Trajectory

After repeated deductions and calculations, he was convinced that his discovery could overturn the whole Miraland.
– Deep in Galaxy

Perry Pat organized his discoveries and made a speech about stars in the Flower Square.
– Secret in Galaxy

He narrated the whole process of argumentation, and boldly speculated that stars were never affiliated to Miraland.
– Dreamlike Stars

At first, the crowd was silent, then burst out into sharp jeers and hiss. His crazy views became their laughingstock.
– Dust of Universe

Almost all races believed that they were the Creator's favorite and should be the center of the universe.
– Endless Spacetime

He ignored the ridicules and believed that his hypothesis would be proved one day, exposing the lies of the elves.
– Alternating Dawn

Over thousands of years, Perry Pat had turned into dust, but his controversial view had finally been recognized.
– Roam in Galaxy

In order to commemorate the philosopher, the year he gave speech was designated as the first year of the Star Year.
– Shiny Morning Star

Although he was ridiculed by all people at that time, he finally carved his glory in the history of philosophy.
– Star of Flame

Back when elves ruled Miraland, people feared the elves' power which moved the heavenly bodies. The philosopher Perry Pat however believed it was some natural law, not magic, which governed these forces and the elves found out about it but the other races haven't. He believed that humans could be as powerful as elves if they understood those laws as well, but the elves who felt their power was threatened brandished him as despicable and drove him out.

Perry Pat set out at night and gradually observed the orbit of the stars. After learning mathematics and astrology, he was further convinced of his theory and delivered a speech of his results. However, everyone laughed when he said the stars were not affiliated with Miraland, as all the races believed they were in the center of the universe. He ignored them, firmly believing the elves' lies about their power would eventually be exposed.

Thousands of years after his death, Perry Pat's discovery was indeed accepted, and the year he gave his speech became the first year of the Star Era, named in his honor.

Retrieved from "https://lovenikki.fandom.com/wiki/Star_Secret?oldid=146521"
Community content is available under CC-BY-SA unless otherwise noted.