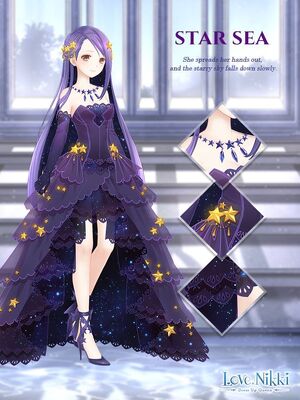 She spreads her hands out, and the starry sky falls down slowly.

Star Sea is a Troupe suit that can be obtained through crafting. It is known to be a very hard suit to obtain due to the large amount of materials needed.

Back to Troupe suits

As the hottest rising dance star on the continent, Sofia is the pride of the Lilith Kingdom.
– Star of Dancing

This is the most precious dancing dress on Miraland. A gift that the god of starry night gives to the human world.
– Star Sea

A gift from god. No one else besides Sofia can wear them.
– Sea of Stars

Stars are the eyes of the sky.
– Starsea Necklace

She spreads her hands out, and the starry sky falls down slowly.
– Starsea Gloves

The descriptions of the suit describe Sofia's beauty when she wears it. Her hair looks as though it's decorated with real stars, and the shoes are so precious only Sofia can wear them. She is the hottest dance star in Lilith.

The suit itself is a gift from the god of the starry night to the human world. (For more information, see Trivia.)

The Star Sea is first mentioned in the story when Nikki, Bobo, and Momo go to Cicia to watch the December Troupe's performance of 'Candy Witch and Star Sea'. Kimi and Joe are also there, telling the theater manager Lisa that the Star Sea was well worth the trip. This sparks their curiosity, and Bobo decides to sneak them backstage in order to see the dress up close.[1]

They stumble upon Sofia, who is not upset they are there. Rather, she tells Nikki that if she beats her in a styling battle, she will invite them to the performance and gift Nikki her cherished ball gown. Nikki wins, and gets the tickets and the gown. Sofia promises her that if she works hard enough at styling, the gown can beat the Star Sea.[2]

The day of the performance grows closer, and on the day of the first public show, Nikki and her friends discover that Lisa is sick.[3] Regardless, the show goes on, and they get to watch. However, an accident occurs during the show, and Sofia is nearly hit by a falling beam. The audience runs out of the theater in panic.[4]

Nikki and her friends think someone must have done it on purpose, and decide to investigate after hearing a thief stole the Star Sea. They go through a secret path to the machinery room. To their surprise, they discover Lisa. She reveals that somebody ordered her to carry out the plan, but says no more, only competing with Nikki one last time.[5]

Sofia gets the Star Sea back and thanks Nikki and her friends for helping to retrieve it. Nikki asks to see the dress on Sofia, and they have a final styling battle in which Nikki beats the Star Sea using her styling skills. As Nikki leaves, Sofia wonders to herself how long she can continue being a dancer while also being a member of the Phantom Thief Family.[6]

It is indicated later that the Phantom Thief Family themselves were the ones that first ordered the theft of the Star Sea, and that the Lilith Government, who Lisa was working for, negotiated a compromise with them.[7]

A version of the suit in the game Shining Nikki

Retrieved from "https://lovenikki.fandom.com/wiki/Star_Sea?oldid=159401"
Community content is available under CC-BY-SA unless otherwise noted.