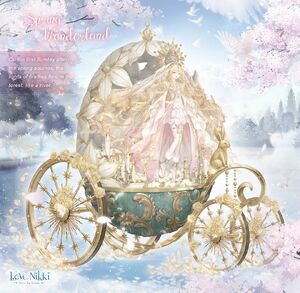 On the first Sunday after the spring equinox, the lights of fireflies flow in the forest, like a river.

Spring Wonderland is a Festivals suit that could be obtained from the Star Spirit Event.

Letta was born in a full-moon night when the lilies fully bloom.
– Brilliant Moon

A bunny fairy said when she was born, she lied on a fluffy fragrant lawn, like just waking up from a dream.
– Flower and Dream

A frost flower fairy intercepted, 'I'm different! I have parents!' 'Me too!' Said several other fairies.
– Spring Flower

Another bunny fairy said he was born when the spring wind first blew over the willow twig.
– Catkin Chat

The Pigeon Forest cover a vast range. Here Letta met many bunny fairies, and every one of them has a unique story.
– In the Wind

On the first Sunday after the spring equinox, the lights of fireflies flow in the forest, like a river
– Soft Poem

It's a magic meeting on the light bridge formed by the magic from all the bunny fairies.
– Magic Promise

Letta reached out her finger, then the magic spirits forming the bridge fell down slowly and new lives were spawned
– Light of Dream

When the fairies ran into troubles, they came to Letta. Under the full moon, her magic power tops many bunnies
– Ethereal Music

Where are all the fairies from? Letta was confused. But, now that she has the power, she would help more people!
– Radiant Psalm

Letta went onto the light bridge in the carriage. The Moon cast the soft light of ancient blessing and new hopes.
– Spring Banquet

What made everyone a rabbit fairy? When chosen as the rite host, Letta understood that it's the hope of generations.
– Shimmer Vow

Retrieved from "https://lovenikki.fandom.com/wiki/Spring_Wonderland?oldid=132239"
Community content is available under CC-BY-SA unless otherwise noted.