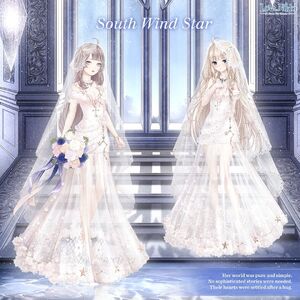 Her world was pure and simple. No sophisticated stories were needed. Their hearts were settled after a hug.

South Wind Star is a 4 Seasons suit that can be bought in the Fantasy Workshop available through Stylist Associations. The suit is based on an attire worn by Starlet. It is also customizable.

Back to 4 Seasons suits

The first fate of the girl appeared on the astrolabe. A young girl picks mint quickly in the smell of mint.
– Unknown Flower

She and the young gardener peeked at each other sometimes. Fragrance of flowers passes their admiration.
– South Wind Star

Her world was pure and simple. No sophisticated stories were needed. Their hearts were settled after a hug.
– Pure Yoke

The simple wedding ceremony was held among the flowers. The white petals fell on her wedding veil.
– Light Silk as Snow

Starlet came to herself, smiled regrettably, giving out a look full of mysteries.
– Falling Stars

The wedding march was played, wiping away the uneasy atmosphere. Gunfire from the horizon can be heard.
– Yesterday's Flower

Want to predict your future? Okay. Starlet pushed her make-believe glasses and worked on her astrolabe.
– Star Crunch-Right

Starlet was lost in a strange country again. Looking for guiding star, suddenly she heard a request.
– Star Crunch-Left

She still hears the promise, but never hears from the man defending the country. She just waits.
– Schrodinger Star

The 2nd fate of the girl appeared on astrolabe. The war spread across the country. She lost touch with family.
– Flower in Full Bloom

She rode through the battlefield on the horseback. The jingle of the horseshoe led her to her love.
– South Wind Daybreak

She huddled up in the building. She can smell the blood and the smoke of gunpowder.
– Yoke of Up and Down

Before losing her consciousness, she saw a bright tall figure. The dust wa covering his white clothes.
– Light Green Silk

She came to herself in the ward, and the busy-working man raised his head towards her at the same time.
– Today's Flower

She made promise to protect her benefactor all her life in a summer night. He cured all her wounds as usual.
– Schrodinger Moon

The third fate of the girl appeared on astrolabe. The young girl stood alone in a castle, wiping astrolabe.
– Dying Flower

With this fate, she rambled under the moonlight alone in a good summer night, wearing luxurious dress.
– South Wind Night

She learned the symbols on astrolabe from a female astrologer. The astrolabe was covered with silver light.
– Yoke of Stars

She left the castle at a young age. The big world awaited this little girl.
– Light Silk as Feather

She traveled to different places, met different people, had lots of accidents, and heard many myths.
– Tomorrow's Flower

She returned to the castle sometimes, but her teacher and seniors were gone. We will meet if we are fated so.
– Schrodinger Ocean

Retrieved from "https://lovenikki.fandom.com/wiki/South_Wind_Star?oldid=146502"
Community content is available under CC-BY-SA unless otherwise noted.