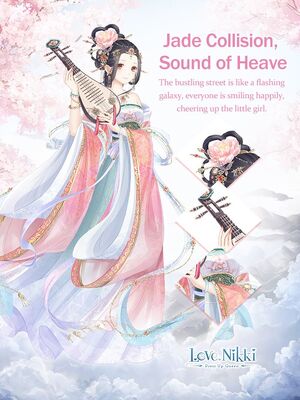 The bustling street is like a flashing galaxy, everyone is smiling happily, cheering up the little girl.

Sound of Heaven, also known as Jade Collision, Sound of Heave, is a Cloud suit that can be obtained from the Art of War Event.

The player was from the south. She tuned the strings slowly, the pretty face looked blear in the moonlight.
– Fairy Bun

Her long skirt was like a belt flying in the wind. The unique southern brocade had the color of running water.
– Extending Green Waters


Cloud Capital Restaurant invited the best player to play on New Year's Eve. The booths were all reserved.
– the Moon Leaning on High Mountain


The music became more cheerful. It seemed as if the player wanted to interpret everything outside the window.
– Flowing Flowers among Greens


The music played even faster. She played the scene of a battlefield, each note stronger than the one before.
– Ten Miles Epiphyllum


Suddenly, a note like smashing silver bottle. Silent then turned soft, like murmuring in the moonlight.
– Buddhistic Jade


Mountains and rivers between them cannot stop their love. Even death cannot separate them.
– Satin Cloud


She used an instrument to show her longing and to tell an old story of a separated couple.
– Zheng Music


The music started. The clear notes were like freezing floating water that ran through the stage.
– Jade Collision, Sound of Heaven

Coming from the south, she is the best player in the country. One can only enjoy her music at such festivals.
– Fall Clear Moon


After plucking on the strings three times she interpreted lots of images into one single piece.
– Moon and River


The performance ended, the audience was still in dreams; was that real or only a dream? Hard to distinguish.
– Song of Green Lotus


The general became enthralled by the music, he tossed down his tea, but it has long since gone cold.
– Cloud Dye-Green


The man in the booths leaned over their tables. 'No southern wine to enjoy with the southern music. Alas.'
– Phoenix Holding Bead in Mouth


Nikki stood at the gate, uttered sighs of admiration. But Momo kept thinking about the special pastries.
– Buddhistic Jade-Green


An quiet grief was emerging. The audiences were lost in thoughts, forgetting where they were and the night.
– Satin Cloud-Green


It is said the music was from ancient Liangzhou. Where is Liangzhou? Is it further than northern frontier?
– Zheng Music-Green

Cloud Capital's restaurant invites one of the best musicians in Cloud to perform at the restaurant on New Year's Eve. She plays a beautiful piece on the pipa, enthralling the restaurant, including a general.

The song began cheerfully, then got faster and faster, turning into a piece about a battlefield. Then the song became soft and gentle as it turned into a story of a couple who was separated by mountains and rivers but still loved each other. After she finishes, the audience is stunned and impressed, having forgotten where they were.

Retrieved from "https://lovenikki.fandom.com/wiki/Sound_of_Heaven?oldid=159533"
Community content is available under CC-BY-SA unless otherwise noted.