Love Nikki-Dress UP Queen! Wiki
Register
Don't have an account?
Sign In
Advertisement
in: Suit, Republic of Wasteland Suit, Event,
and 4 more

Soul Seer is a Wasteland suit that first appeared in the Dance of Black Rose Event. It can be obtained through evolution and its recipes can now be bought in the Store of Starlight.

I can hear wind whisper since I was born. It talks about the wasteland, the tribes, and everything.
– Wind Whisper

The old spells were chanted to invoke for a good year for the tribe.
– Wilderness Song


When the eagle passes the chieftain's tent, a baby's cry was sounded.
– Eagle's Prayer


Every tribe has its totem and song, and the prophets will sing the song generation after generation.
– Eagle Song


Use precious sacrifice to pray for secret design ability is the tribe's tradition.
– Wild Python


Scepter contains the power of wasteland. It's the symbol of Prophet.
– Prophet Scepter


A bracelet from a diviner in Gold Stone tribe, with its mysterious totem carved on it.
– Golden Bracelet


Crisp rings of the beads bracelet, like chanting the ancient spells of some rite…
– Golden Belt

Ominous words brought by cold night wind. Someone was trying to gain power yet only got killed.
– Wind Whisper-Rare


Ancient spells whispered to pray. The sacrifice ceremony is the greatest event every year.
– Wilderness Song-Rare


All the tribes have records of sacrifice ceremony, but only the prophets know the meaning.
– Eagle's Prayer-Rare


What's most tempting is the most dangerous. Behind the crown, death may covet.
– Wild Python-Rare


Scepter passed down for generations. It shines even after so many years.
– Seer Scepter-Rare


Collected from a forest in another place. Nobody knows why you can sense wasteland on it.
– Feather-Rare


The favorite bracelet of Gold Stone Prophet as its design was a gift from his father.
– Golden Bracelet-Rare


The beads bracelet keeps ringing. Are there some wasteland men in the forest?
– Golden Belt-Rare

I can hear wind whisper since I was born. It talks about the wasteland, the tribes, and everything.
– Wind Whisper-Epic


Pigeon girl, how dare you try to tempt Death with the black rose?
– Eagle's Prayer-Epic


Though it's none of his business, the prophet decided to save the young girl.
– Eagle Song-Epic


What's most tempting is the most dangerous. Behind the crown, death may covet.
– Wild Python-Epic


Scepter passed down for generations. It shines even after so many years.
– Seer Scepter-Rare


The emotion between souls. Though touching, it can only end.
– Feather-Epic


Materials check, design check. Only this ball is waiting before leaving.
– Golden Bracelet-Epic


A surprising encounter, with a splendid beginning but silent ending…
– Golden Belt-Epic


The pupils of Prophet lead the truth out of the mist and guide the soul out of the nightmare.
– Soul Divination 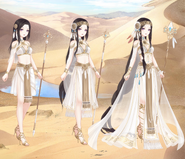 The full Evolution of the suit.