Song of Dream Parrot is a Troupe suit that appeared in the Parrot Princess Event. The suit is customizable and when customized, it is called Fire of Blood Parrot. It can now be bought in the Clothes Store and obtained through Crafting.

In the gloomy and rainy night, a prince saw a pretty parrot chirping in his dream, which was in the tree as the feathers were pearl white and the face was adorably red like apple. She was so happy in the forest as if no worry or anxiety ever bothered her.

One day, the hunting prince lost his way in the forest. He saw that dream bird–the unsuspecting one perched on lake shore who transformed into a lovely maiden. The curious girl approached the lad lying on the grass, but he grasped her wrist.

The prince was shocked by her beauty and brought her back to the palace. He summoned the best craftsman in the kingdom to forge a golden cage for his bird. But no matter how magnificent or precious the cage was, it was nothing but prison restricting her liberty. Even the rarest treasure in his kingdom could not bring back the cooped girl's smile.

The sad parrot princess was praying for freedom cravenly, however it made no difference. There was no savior, but the prince jailed her in this tiny cell with his love as the strongest chains.

The snow-white wings offered her beauty and deprived her of escape in the night when the prince fell asleep. What was the meaning of this pair of wings, no matter how beautiful they were, if she lost the liberty of soaring into the sky?

The bird in cage sings day and night. You name it love but you cage a free soul for your own good.
– Snow Melody-Epic, Snow Melody-Rare and Snow Melody

The Prince convened the best craftsmen to build this beautiful gold cage. But, it's still a cage.
– Gold Cage-Epic, Gold Cage-Rare and Gold Cage

All the innocence is worn and all the love is gone. What she misses most is days in the forest.
– White Feather-Rare and White Feather

She had the most beautiful smile, but even the most precious treasure cannot make her laugh again.
– Ruby Cheek

Her faith lies in the boundless forest and blue sky. It is the sense in the wind called freedom.
– Ethereal Faith

Song of Dream Parrot and Fire of Blood Parrot describe the misadventures of a beautiful parrot princess who lived freely and happily in the wild, until she was captured by a Prince who claimed to be in love with her. Song of Dream Parrot describes her first days as his prisoner: she's been locked away from her beloved forests and inside a "gilded cage" built for her by the Prince's craftsmen, so she is very unhappy and longs for her lost freedom. She smiles and sings in her cage but believes herself to be a prisoner and resents the Prince's selfish "love".

Song of Dream Parrot is based on the sulphur-crested cockatoo.[1] 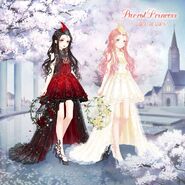 With the suit Fire of Blood Parrot

Retrieved from "https://lovenikki.fandom.com/wiki/Song_of_Dream_Parrot?oldid=115878"
Community content is available under CC-BY-SA unless otherwise noted.