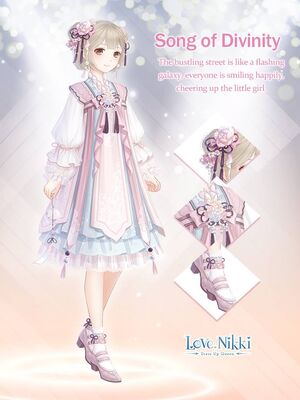 The bustling street like a flashing galaxy, everyone is smiling happily, cheering up the little girl.

Song of Divinity is a Cloud suit that can be obtained from the Art of War Event.

The moon is as pure as jade. On New Year's Eve, the palace is even more lonely.
– Gorgeous Moon

The bustling street is like a flashing galaxy, everyone is smiling happily, cheering up the little girl.
– Song of Divinity

She has been preparing for this day for a long time! Her dream has finally come true!
– Verse like Limpid Water

The tall palace wall separates her from another world. She sneaked out from a hole on the rockery.
– Falling Snow-White Sakura

Is this the New Year's Eve feast of Cloud Capital? She looks at the lights and people on the street.
– Cardamom in Spring

The fireworks light up her eyes.
– New Year Ring Bell

Looking at the aeolian bells under the eave along the street, she hoped the world would be forever in peace.
– Blessed Aeolian Bell

With light steps, the little girl ran past all the passers-by along the long street.
– Gorgeous Moon-Green

The ghost masks hanging over the racks were like the face of Brother Xi when he frowns at her poor homework.
– Song of Divinity-Green

Many lanterns were showing off. She bought the cutest rabbit one but still wanted the biggest dragon one.
– Verse like Limpid Water-Green

Figures were sold. She saw a unique one with a young general wearing armor and holding a spear.
– Falling Snow-White Sakura-Green

A juggler was surrounded by crowds. He sprayed flames toward her and frightened her.
– Cardamom in Spring-Green

She looked around, fancy things were too much for her eyes. 'Ouch!' She ran into someone. 'Are you OK, miss?'
– New Year Ring Bell-Green

Raising head, she saw a lady smile. 'You are beautiful!' She grinned and ran away, leaving the latter puzzled.
– Blessed Aeolian Bell-Green

She has lost her map and couldn't find her way back. She couldn't see the red walls and the golden hall.
– Gorgeous Moon-Smoke

The little girl was bewildered. Brother Xi was right. All work will fail by careless mistakes.
– Song of Divinity-Smoke

'You are here.' She heard a gentle voice, and with her misty eyes, she sensed a fairy white figure.
– Verse like Limpid Water-Smoke

'How did you know I was here?' 'For I am a fairy.' He patted her on the head. 'Don't slip away next time.'
– Falling Snow-White Sakura-Smoke

The fairy childe led the girl through the streets and alleys. The red wall of the palace is vaguely up ahead.
– Cardamom in Spring-Smoke

The fairy childe looked at her. She was smiling and reluctant to go back to the palace. 'Just one more look.'
– New Year Ring Bell-Smoke

She understood. Looking back, the Long Street was like another world. Two Shadows fell on the ground.
– Blessed Aeolian Bell-Smoke

The three versions of the suit tell the story of the Cloud Empress on New Year's Eve. The palace is lonely, and she is not allowed to leave, so she sneaks out through a hole in the walls, curious about the outside world. She observes the celebration occurring in Cloud Capital and the fireworks, and is in awe.

The Empress then ran down the street, enjoying the festivities. There were ghost masks, a juggler, figurines, and lanterns in many shapes. With all of the distractions around her, she ran into a woman by accident. When she saw the woman, she told her she was beautiful and ran off again. The Chinese text reveals that the woman has pink hair.

Unfortunately, she found herself lost, and remembered her instructor Bai Yongxi's words about not making careless mistakes. She suddenly happened upon a person described as a fairy dressed in white. The Chinese text indicates that this person is Fu Su, with Empress addressing him as "immortal-gege" or Brother Immortal, the same way she does in Poised Forest. He leds her through the streets and gave her one last look at the celebration before she returned to the palace.

For Yue Qianshuang and Zhu Ruosheng's version of the same night, see Wind in Starry Wilderness.

Retrieved from "https://lovenikki.fandom.com/wiki/Song_of_Divinity?oldid=146488"
Community content is available under CC-BY-SA unless otherwise noted.