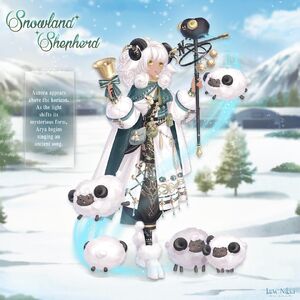 Aurora appears above the horizon. As the light shifts its mysterious form, Arya begins singing an ancient song.

Many small villages sit in this mountain area. This is where Arya was born.
– Stretched Snowland

The lamb leads her to a frozen lake where a traveler lied under a tree. Arya puts him on the back of a sheep.
– Aurora Light

The weather changes so suddenly that they miss the time to turn back. They have to hide in a cave.
– Dark Gold Pattern

In shimmering light of fire, the young traveler wakes up gradually. Arya gives him a cup of hot tea.
– Long Night

It turns out that the traveler came to see the legendary aurora, but he didn't anticipate the hard weather.
– Tread in Snow

Luckily, the herd quickly shove him out. When Arya lets out a sigh of relief, she's told a sheep is buried too.
– Friend from Mountains

The docile lamb is still sleeping in the embrace of Arya, but the wind is showing something not good.
– Listen to Seasons

It's snowing outside and as Arya and the traveler talk, the earth starts shaking.
– Sense of Earth

Aurora appears above the horizon. As the light shifts its mysterious form, Arya begins singing an ancient song.
– Star Guidance

The snow grows bigger and bigger. The storm is coming. They have to leave before it's too late.
– Herd Beacon

Luckily, the lost sheep digs its way out. The traveler bids farewell to Arya and heads to his next stop.
– Snowland Shepherd

The sky has revealed a ray of light. Arya drives the herd home, the peaceful ring echoing on the snowland.
– Snowland Ring

The tired traveler rests on the rock. Suddenly, snow rushes down and buries him.
– Golden Dawn

Snowland Shepherd is about Arya, a girl who was born in one of the many small villages in the mountain area. The story takes place during morning—just at the crack of dawn—when Arya was driving a herd of sheep home through the snow-covered forest. A lamb suddenly strayed and lead her to a frozen lake. Beneath a tree on a rock, a young traveler was caught under the snow. He had been buried by the snow when he was resting. Luckily, the herd managed to quickly shove him out of the snow, and Arya put him on the back of a sheep. However, the weather changed so suddenly that they missed the opportunity to turn back. Arya, the sheep, and the traveler were forced to hide in a cave.

As the traveler gradually woke up, Arya made a fire and offered him a cup of hot tea. It turned out that the traveler came to see the legendary aurora but didn't anticipate the hard weather. She recalled how the herd rescued him and sighed out of relief, but when she did that, the traveler told her that a sheep was buried too somewhere. The docile lamb that strayed the herd was sleeping in Arya's embrace, and Arya felt something off from the wind. It was snowing outside the cave, and as the two of them were talking, the earth started shaking. The aurora appeared above the horizon, and as the light shifted in its mysterious form, Arya began to sing an ancient song. However, the snow grew bigger and bigger, and a storm was coming: they had to leave before it was too late. Thus they left the cave and found the buried sheep, who luckily had dug its way out. The traveler bid Arya farewell and headed to his next stop.

Retrieved from "https://lovenikki.fandom.com/wiki/Snowland_Shepherd?oldid=160219"
Community content is available under CC-BY-SA unless otherwise noted.