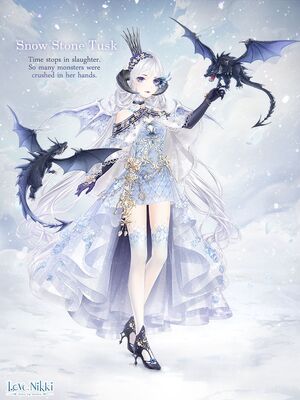 Time stops in slaughter, so many monsters were crushed in her hands.

Snow Stone Tusk is a Pigeon suit that appeared in a Cumulative Recharge from January 31st to February 6th, 2018 for 520

. It can now be bought in the Clothes Store.

She's been trying to piece her broken body, her limbs, guts, and her unfinished mission.
– Moonstone

In the story of Kindred, Stone Bone is the gatekeeper of the Unspoken One. She's horrible, powerful and loyal.
– Silent Stand


Time stops in slaughter. So many monsters were crushed in her hands. Only the Blood Moon stays accompanied
– Sand of Time


Her memory stays at the moment when Kindred Queen wields the edge. Then the stone breaks, then comes the pain.
– Snow Scale Stone


Faster, faster… the Gate of Reflection is opening.' She uses last strength searching for the remains of her body
– Silent Moment


For ages, black dragon and Stone Bone guarded the pass, so nobody will enter and no dark creatures will escape
– Wing of Death


What's crucial is the half dragon wing. Without it, she will be petrified. But Dragon Hunter holds it now.
– Thorny Stone Crown


The holy gun aims at her heart, 'take me to the City of Reflection.' However, the entrance is blocked already
– Eye of Truth


When the half dragon wing was pieced back, the wings flatters and flame melts all the crevice
– Horn of Rebellion


But Demon Hunter took back the Gun, using her own blood chanting the spell. Stone Bone is now her servant.
– Covenant Constraint


Her mission ends as the city needs her protection no more. The holy gun will turn her into stones again
– Frost Dragon Scale


She has lost her drive, but she has a new master now. They have the same goal, finding City of Reflection.
– Stone Bone Demon


With that face, she's no evil. She expels light and dark, living and guarding the tunnel between two worlds.
– Shadow Ice Stone


Stone Bone is a loyal guardian. No matter how many times they break, they will reborn and kindle Blood Moon
– Abyss Guard

Retrieved from "https://lovenikki.fandom.com/wiki/Snow_Stone_Tusk?oldid=183014"
Community content is available under CC-BY-SA unless otherwise noted.