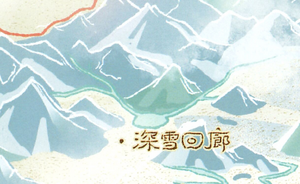 The Snow Corridor is a snowy gorge located in the west of North Kingdom in the Arctic Mountains. It is frigid, windy, and uninhabitable.[1]

The fortress located at the end of the Snow Corridor is guarded by the Nameless Knights. Inside is kept what's said to be the key to the Blood Curse. The Nameless Knights wear their uniform of white robes and carry spears as they walk around it, ready to defend what's inside from outsiders.[1]

Gray Raven owned a laboratory nestled deep in the mountains near the Snow Corridor. It was protected by a sturdy iron gate and locked with a code, with the control panel inside an iron patch on the gate. The inside of the lab was filled with an incubator and incubation tubes, big enough to hold a human. There was also a secret doorway leading to a secret basement, which exited into a tunnel.[3]

It was uninhabited in the beginning of the year 677, but still had defense mechanisms set up inside it. One of these was the temperature, which would lower quickly upon any intruders entering. Damage to the devices inside it would also trigger the defense system. However, the defense system could be bypassed by cutting off the power.[3]

Retrieved from "https://lovenikki.fandom.com/wiki/Snow_Corridor?oldid=167154"
Community content is available under CC-BY-SA unless otherwise noted.