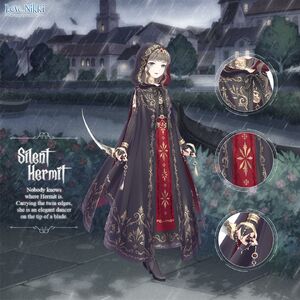 Silent Hermit is a North suit that could be obtained from the Assassin's Night Event. It can now be obtained through Crafting and from the Clothes Store.

Nobody knows where Hermit is. Carrying the twin edges, she is an elegant dancer on the tip of a blade.
– Silent Hermit


The lingering ghosts, the nightmare. It's like the fire of purgatory that burns Hermit in the nights.
– Silence of the Dead


On the night of the blood moon, in the city of sin, judgment draws near. The blood-red sword awaits the lambs.
– Hermit's Cloak


Hemmett, who sent out the assassination letter, is tasting the tea. Red moonlight falls and flurried steps sounded.
– Messenger from Hell


The fire lit by the betrayer engulfed everything. The flames painted red the night sky and the weeping girl’s face.
– Crown of Thorns


Ambition is the root of evil and destruction. By spilling the Betrayer’s blood she comforts the souls of the dead.
– Chain of Sin


To take a life in a blink and vanish into air. A butcher? No, that's too savage. Assassination is an art.
– Art of Assassination


'Assassin is just a blade, the only difference is who holds the blade.' Hermit smiled, 'Time to end this game.'
– Dual Daggers


The cold green eyes are like still wells with murderous intent deep inside. Hermit waits for the time for the kill.
– Hidden Serpent

According to an official post by the official Weibo (pictured below), Silent Hermit is 165cm tall (5'5) and has blood type O. She's described by witnesses as "aristocratic and elegant" with a calm demeanor, and she kills with just one hit. Her preferred weapon is close combat with a pair of curved blades (as shown in her suit). She's suspected to be linked to several missing cases. (Translations by athena#2202)

Retrieved from "https://lovenikki.fandom.com/wiki/Silent_Hermit?oldid=181441"
Community content is available under CC-BY-SA unless otherwise noted.