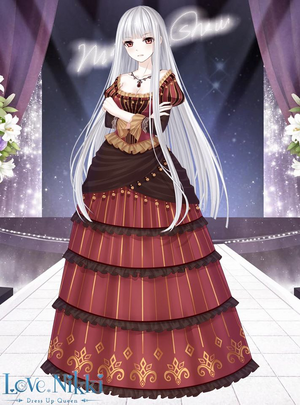 Sherry is a character in Love Nikki. She is a former member of Queen Elle's Iron Rose Stylist Legion, which carries out her orders in regards to stealing designs and keeping Pigeon Kingdom's high position in Miraland.

Sherry has red eyes and long, silvery straight hair that extends past her waist with a straightened bang. She wears clothing typical of Pigeon, usually a deep burgundy dress with puffy sleeves and a long skirt, and a black necklace with a dark red gem. She's considered as very beautiful by those who meet her, including Nikki herself.

Sherry is a sharp-tongued young woman, who never smiles and is quite snippy to near everyone around her. The only time she's broken out of this is when she meets Ace and is shocked at the sight of her.[1]

Not much is known about Sherry's past. However, it's said that she has always wanted to break the shackle of her fate, even if it comes with a price.[4]

Sherry traveled from Pigeon to Lilith in order to compete in the Fantasy Styling Contest during this year. She was curious about Nikki's newfound popularity, and treasured the opportunity to compete with her.[5] When the rebellion began at the end of the contest, Sherry escaped with Mela, who was also there to visit.[1]

During the contest, Sherry kept looking at Ace, and afterwards, she tried to find her again. She finally apprehended Nikki, Ace, and the rest of the group in the Republic of Wasteland, where they were searching for the Miracle Scroll. She insisted that Ace have a private conversation with her, and began to talk about Ace's purple hair when Ace cut her off and agreed to talk.[2] After the two talked, Ace decided to leave Wasteland.[6]

Together with the Iron Rose, she also helped bring the Dawnblade to Nikki in Cloud City under Elle's orders. She drove the airship into Cloud and landed it nearby, allowing Nikki to defeat Nidhogg. Then, taking out a scroll, she formally declared war on the League Tyr.[7][8] After this, she took Nikki and her friends back to the Iron Rose's camp outside Lor River City and parted ways with her then.[9]

Later that year, the Iron Rose disbanded, leaving Sherry upset. However, still loyal to Queen Elle, she let matters be and did not attempt to investigate the matter further like Ransa did. After Ransa and Nikki ran into her just outside Oren, she told them that she didn't agree with their persistence, but regardless, she helped them sneak into the city.[10][11]

Though Sherry and Ransa were part of the Iron Rose together, they took different paths after it ended, with Ransa pursuing the truth behind why it was disbanded and Sherry taking a more passive role in deference to Queen Elle. She envies Ransa's courage and perseverance, and pretended to help Nikki and Ransa,[11] but instead alerted Elle to their presence to foil their plans.[12] It's also implied that they have a long history together.[10]

Like Ransa, Sherry and Debbie were part of the Iron Rose together, and they took different paths after its disbandment.

Sherry is very loyal to her queen. She shows overwhelming loyalty towards her and takes her disbandment of the Iron Rose seriously, not daring to continue the group's activities. She cooperated with Elle to foil Nikki's attempts to pursue the Iron Rose mission.

Retrieved from "https://lovenikki.fandom.com/wiki/Sherry?oldid=142255"
Community content is available under CC-BY-SA unless otherwise noted.