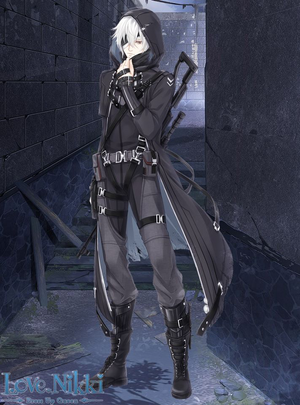 Shade, known also by his former name Flynn, is a character in Love Nikki. In the past, he was a military officer of the Apple Federation, and Orlando's best friend. Currently, he is an assassin in league with Nidhogg and the League Tyr.

Shade is depicted as a man with messy white hair that covers one eye, which is bandaged and also has an eye-patch over it. His revealed eye is a dark red color. A long scar runs diagonally across his face. He wears a classic assassin suit reminiscent of a male version of the Assassin's Faith or the Beautiful Agent suit.

As Flynn, he had untidy short blond hair.[1] Shade shares a number of key similarities with his 18-year-old self, including his voice, stature, and even the way he holds his gun. However, his hair and eye color are different.[10]

When he was Flynn, he was described as an energetic prankster with a knack for creating inventions. However, most of his inventions are very impractical and not useful for soldiers of Apple Federal, according to Orlando. He is very cunning and quite intelligent, having full marks in history class despite finding it boring.[13]

In the present as Shade, his personality seems very different from the past. He is mysterious, stoic, and cold, seeming to not care about, or possibly not remember, Orlando.[5] However, he shows a hint of his joking nature when he pretends to force Orlando to thank him for not killing him. Even though he works for Reid, Nidhogg, and Ozeca, and is allied with the Night Order, he only views the assignments they give him as tasks to be completed, and doesn't feel the need to follow any of their orders after he's done.[14]

Shade is unable to feel physical pain. This means that he also doesn't feel the effects of the Blood Curse.[15]

Due to Shade living under two names and identities, he will be referred to by the name he went by at the time of the events occurring.

Flynn was a cadet at Apple Federation Military Academy during this year, where he was best friends with a boy named Orlando.[1]

During this year, he and Orlando found a black cat called Mr. Lancelot, who, unbeknownst to them, belonged to a girl at a welfare house named Nina. However, upon learning that she couldn't keep Mr. Lancelot, Flynn implored Orlando to keep him at his house, to which he agreed. They invited her to spend weekends with them so she could keep seeing him. Flynn also told her to think of them as her brothers from then on, since she was alone.

After his mother Xinglin was caught for stealing the cure that would save Lady Crescent, journalists hounded him trying to find out more information. However, just like his mother, Flynn refused to answer their questions.[11]

Flynn was still attending the military academy along with his classmate Orlando. They often competed for the top spot in the academy,[13] with Orlando getting roped into testing out Flynn's new inventions or his childish pranks.[16][17]

When the two men graduated, they made a bet that whichever lost the title of 'Immortal Glory' in the final graduation ceremony, that he would owe the winner one unconditional promise or favor. The 'Immortal Glory' title is the highest honor a graduate of the military academy could receive.[18]

The final mission given to the cadets was to chase and pursue a terrorist and retrieve the design he stole. Orlando was appointed as the temporary commander.[19] The night before the mission began, Flynn showed Orlando a new invention he had made: an umbrella that functioned as an electromagnetic gun made of bulletproof material.[20]

During the mission, Flynn accompanied Orlando down to the base of the waterfall the terrorist was said to have jumped down, despite Orlando's reluctance to let him.[21] At the base, the group was surrounded by men of the terrorist organization, Viper, and fighting ensued.[22] During the battle, a terrorist attempted to shoot Orlando with a poison dart, and Flynn protected him with his body. Using Flynn's umbrella, Orlando was able to defeat Viper, at the cost of Flynn's life. He supposedly died from the poison dart.[23]

During this year, Morrison attempted to steal the key to the Blood Curse from the Nameless Chivalric Order. This resulted in a violent skirmish in the Snow Corridor in Morrison's lab. Flynn, now under the identity of Shade, was there, standing in the shadows, and he shot Lionel just as Lionel went to stab Morrison. He then silently went to stand behind Nidhogg. Louie, shocked, asked Nidhogg who Shade was, and Nidhogg replied that he was "Dr. Morrison's opus magnum" [sic] and that he was a masterpiece that transcended the Blood Curse.[24]

After the dress White Blossom was stolen and Kimi and Reid met at the headquarters of the Apple Federation Apparel Group, Shade appeared and shot a hole in the window, telling them that his target was White Blossom. Orlando, who was there as well, aimed his gun, but suddenly recognized him for who he really was and called him Flynn. Charles attempted to get away with White Blossom, and Shade shot him suddenly, killing him.[5]

Shade said that Orlando was mistaken and quickly left with the dress. Though Orlando insisted Shade was Flynn, Reid told him that he went by Shade, a highly wanted criminal assassin allied with Nidhogg.[5]

Shade went to Losol afterwards, causing the Apple military to blockade the entire city.[25] He went to a League Tyr recon post outside of the city, where he was reprimanded by Ozeca for shooting Charles.[26] However, Orlando, along with Nikki and her friends, found a way in and infiltrated the post.[6] While Shade went to the armory room, Orlando threatened Ozeca with a gun,[26] but Shade was alerted to the incident when Bobo tripped over some racks.[14]

Ozeca pleaded with Shade to kill Orlando and the others as Orlando turned off his gun's safety, but Shade put down his own weapon, saying that he had nothing to do with the mission now that his own task had been completed. Shade then raised his gun again and pointed it at Orlando's heart, asking why he hadn't thanked him, before following up with a "Just kidding" and declaring the two of them even.[14]

Orlando and Flynn were best friends and classmates at the Apple Federation Military Academy.[13] Though Flynn pranked him often, he clearly cared about Orlando, going so far as to take a bullet for him.[23]

As Shade, he showed no recognition of his old name and only called Orlando "Commander". However, he refused to shoot Orlando both at Apple Apparel Group headquarters[5] and at the League Tyr outpost,[14] despite them being on different sides of the war.

Xinglin was Flynn's mother, and they shared a number of similarities; one such similarity was that both were very proud, daring people. 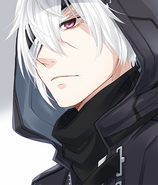 Shade with Yvette, Agata, and Ming Shuiyuan
Add a photo to this gallery

Retrieved from "https://lovenikki.fandom.com/wiki/Shade?oldid=129351"
Community content is available under CC-BY-SA unless otherwise noted.