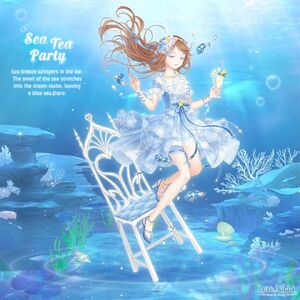 Sea breezes whispers in the ear. The smell of the sea stretches into the dream realm, leaving a blue sea there.

Sea Tea Party is an Apple suit that could be obtained during the welfare event Treasure Island. It can now be obtained through Crafting.

The freckled boy chases the tide. Not far off, his brother watches the mysterious sea with curiosity.
– Fairytale Fantasy

The sea reminds him of the story they read together. The wind recounts the memories of the mermaid and the bird.
– Navy Secret

The mermaid sings her longing for the sky. The bird follows the sound to the sea. They met then for the first time.
– Chasing Waves

Occasionally birds fly over the sea, maybe under the surface there is a mermaid surrounded by fish.
– Kiss of the Sea


The mermaid gently moves her shiny tail as she listens to the bird's story. The boy longs for the outside world.
– Moment of First Meet


The sea is no longer lonely. The mermaid would wait under the sky every night for the bird to arrive with stories.
– Heavenly Gift


The sea breeze carries the song into the sky and piques the boy's curiosity. How do the waves flow over the beach?
– Sea of Delicacy


In the blue sea, the mermaid sings about her yearning for freedom. The boy outlines his future on a piece of paper.
– Ocean Blue


On the shore, the boy listens to the sound of the waves. He wonders if the mermaid song is hidden in them.
– See Breeze


On the night they finished the story they agreed to take a trip to see the sea where the mermaid and the bird met.
– Mermaid Song


At the tea party on the beach, the two boys are pleasantly surprised by ice cream generously topped with fruits.
– Orange Soda


The chair wobbles as the boy's toes touch ground. The hot summer is cooler because of this dessert.
– Cool Summer


Ordinary days are made special by companionship, just like that summer day the mermaid and the bird spent together.
– Summer Fantasy


Sea breeze whispers in the ear. The smell of the sea stretches into the dream realm, leaving a blue sea there.
– Summer Time


He walks on the white sandy beach as the waves gently kiss the shore. That's a summer memory.
– Trace of Summer


Maybe several years later, these friendships of youth will, like footprints on the beach, be washed away by waves.
– Wave of Youth


Shell takes in a grain of sand and with time turns the granule into a round and opalescent pearl.
– Boon of the Sea


Even if one day everything changes, the waves blown by the sea wind will still ripple in the heart.
– Warm Recollection 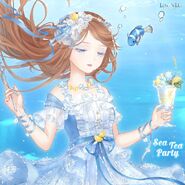 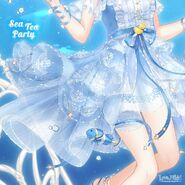 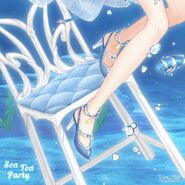 Retrieved from "https://lovenikki.fandom.com/wiki/Sea_Tea_Party?oldid=180651"
Community content is available under CC-BY-SA unless otherwise noted.