Schiller is a character in Love Nikki. He is the president of the Apple Federation Apparel Group,[4] as well as the father of Kimi[5] and the husband of Lady Crescent.[6]

Schiller is a man who ultimately cares very deeply for his family, but is not used to expressing his feelings.[1] He has a serious temperament, but he pushes his daughter Kimi to do her best and believes in her.[7] 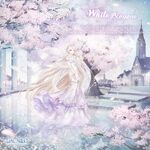 White Blossom[8]
Add a photo to this gallery

Schiller met his wife Crescent and fell in love with her. During their adult life, they traveled around Apple Federation together, witnessing both the good and bad parts of the country.[1] For her, he designed the White Blossom, considered his most prized work, and presented it to her in Welton's City Square. He incorporated Eris' Kiss, Apple's biggest diamond, in the design of the dress.[8]

In or around this year, Schiller's daughter Kimi was born. For the next few years, he and Crescent raised her together and taught her to be independent. From an early age, she expressed the desire to be a designer as good as Schiller.[1]

Together as a family, they went every year to the Children's House in Welton, spending Christmas there volunteering.[6]

Crescent fell ill during this year with what most people assumed to be a common cold, but it turned out to be an incurable, lethal virus that even the doctors of Welton did not know how to treat.[1]

Researchers from the Rosset Research Institute stole a blood sample from Crescent and used it to develop a cure, then brought it to Schiller at the Apple Apparel Group building. They openly negotiated with Schiller, telling him that they would like the Eris' Kiss in return for the cure that would save his wife. They also wanted to gain access to his treasure vault, where the White Blossom was stored.[1]

Schiller refused at first, but his wife continued to get sicker and sicker, and even started to have nightmares that he could not save her from. She fell into a deep sleep and did not wake up for a long time. Despite all of the support they might have had, he despaired that he would not be able to save her without the cure.[1]

Rin, Crescent's best friend and a researcher from the Rosset Institute, approached Schiller and told him that she would steal the medicine from the group for Crescent. Schiller felt hopeful and did everything he could to help her, but ultimately she was unsuccessful and found herself subjected to a smear campaign and jail. Schiller had to face the fact that without giving up Eris' Kiss, he would be unable to save Crescent, so he took it from the dress and began to take it to the Rosset Group.[1]

Right as he was about to do so, Crescent awoke and called Schiller from the hospital. She wanted to wear the White Blossom once more. Schiller did not want to say no, so he brought the dress and the diamond back to Crescent and had her wear his design once more, though she was so thin it no longer fit. With both the White Blossom and Eris' Kiss, they went to City Square in Welton one last time, and afterwards they replaced the dress in the vault.[1]

She passed away three days later. Schiller attended the funeral, but left early to say goodbye to White Blossom once more. Upset that his lifetime love had been ended, he began to feel that life was meaningless. Just then, six-year-old Kimi came to him and told him of her promise to protect him.[1]

During this year, Schiller found himself facing financial issues with the Apple Apparel Group. He had to withdraw designs, and people began to speculate that he had lost his touch as a designer. However, he refused to show weakness in front of his daughter Kimi, who was attending design school herself, or to let her help him at the expense of her education.[7]

During this year, Schiller made some plans to retire in order to let Kimi take over the Group.[9]

Soon after, Schiller found himself being threatened again for the Eris' Kiss and White Blossom, as well as for his anti-war positions.[10][11] This time, it was by Reid, who was allied with Nidhogg. War broke out, and the League Tyr and Apple Federal were allied together against Cloud Empire.[5] Schiller likely had the idea to present the White Blossom to the world using the White Blossom Banquet,[12] though the common belief was that it was the idea of Reid and Charles.[13][14]

Schiller stopped attending Board of Directors meetings, and Charles took over as chairman.[4] He went to Losol during the banquet, and though it was reported as a kidnapping he went voluntarily.[5][15]

Kimi, Orlando, and Charles both went out of their way to protect the White Blossom, even though Schiller had already surrendered it. This resulted in Charles losing his life,[15] and Kimi being put in serious danger. Eventually, though, when forced to make the decision between White Blossom and her friends' safety, she finally realized why her father had surrendered the dress and made the decision to hand it over.[11] Orlando also attempted to track down Schiller, and though his mission was confidential, he told Kimi that he had managed to ensure his safety.[16] Orlando accompanied Schiller on the way to Black Water City, the capital of North.[17]

Kimi made further steps towards bringing her father home by becoming a diplomat.[18] Eventually, he was able to return to Apple, shortly after Kimi became a candidate in the upcoming presidential election. He stated in an interview that he supported her decision to run and that he would give her financial and logistical support during the election.[19]

Schiller and Crescent were married, and deeply in love during their time together. Their love was considered a lifelong love, and in City Square they had a plaque installed with the phrase 'Love; From a Moment to a Lifetime' and their names. Schiller viewed the White Blossom as a testament of his love for her, and went to great lengths to protect it.[1]

Schiller cares a great deal about Kimi's education and did not want her to help with the Apple Apparel Group before she had finished school. He told her that she would have her own journey and that she was still too young to be involved, especially when she had a project to finish.[7] Several years later, after she had run the Apple Apparel Group in his absence, she announced that she was running for president, and he promised to support her on the way, indicating that he believed in her ability.[19]

Kimi cares a lot about her father's well-being, and as a child she promised her mother that she would protect him once she was gone. Even when she was sixteen and stressed about both her own senior design project and the fate of Apple Apparel Group, she refused to take a break from her responsibilities and budge from her promise.[6] Later when she was eighteen and her father went missing, she went straight into dangerous territory in order to rescue him.[20]

Retrieved from "https://lovenikki.fandom.com/wiki/Schiller?oldid=143756"
Community content is available under CC-BY-SA unless otherwise noted.