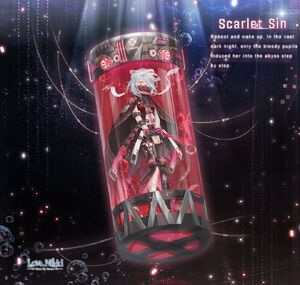 Reboot and wake up. In the vast dark night, only the blood pupils induced her into the abyss step by step.

Scarlet Sin is a Ruin suit that appeared in the Deepsea Secret Event.

The pointer stopped and the nightmare in her mind finally ceased. Because… she has become the nightmare herself.
– End of Nightmare

When Newton adores her work, she doesn't know the destruction is approaching the world.
– Destruction Arriving

It seems to end soon. Her breath went weak with every second. In the end, only a broken body will be left.
– Broken Body

Morality was twisted in the consciousness, but she knows that person will save her, no matter how low the chance is.
– Chaotic Moment

The great pain and constraint gave her illusions. It's a nightmare, I will wake up soon.
– Spiritual Bond

The great pain of laceration took her. Her brain was like being cut by countless chips. She's losing her sense.
– Losing Control

An uncontrolled idea is running wildly in her heart. What am I? Am I a monster?
– Core of Evil

A sharp light was poured in, searing the wounds. Is it the hope of rebirth, or darker reality.
– Messy Bandage

Sophie cried crazily. The thirst of blood is out of control and burst out. Newton didn't stop her.
– Yoke of Prison

Like the ship of Theseus[1], as Sophie reopened her eyes after the reform, is she still the same?
– Medical Cabin

Her eyes went unfocused and hollow gradually. Bloody scarlet rigged her weak nerves as if to devour lives.
– Hollow Pupil

Reboot and wake up. In the vast dark night, only the bloody pupils induced her into the abyss step by step.
– Dark Reform

Sophie once transformed the capsule privately to escape a disaster. But now, the capsule has become her prison.
– Doom Escape Capsule

Thereafter, no rule can bind her. She obeys to the survival instinct only, until the day of final destruction.
– Chaos and Order

Scarlet Sin describes Sophie, a scientist that was experimented upon by a fellow researcher, Newton. Newton inflicted wounds and lacerations as well as mental pain on Sophie, which in turn gave her illusions. Her consciousness slowly faded away as she questioned whether she had become a monster. She believed that it was just a nightmare, and that she would soon wake up. She also believed that, no matter how low the chance was, a certain person (who is most likely Newton) would save her. However, despite her distress, Newton adored her work and didn't stop her from succumbing to her instincts. Sophie's mind had ceased completely, and she became the very nightmare itself, only acting according to her survival instinct.

Her mind was not the only thing that ceased; her body deteriorated as well. Experiencing a transient calmness, her breathes weakened as blood flower adversely and her warmth gradually leaving her. A broken body was the only thing left in the end as she sunk into the abyss, which could refer to her going insane or dying.[2]

At one point Sophie had transformed a capsule in private to escape disaster, but now after being experimented on, it held her captive.

The event text of Deepsea Secret Event indicates that Newton's experiment was fictional, being the theme of an immersive Game Center event.

[1] Ship of Theseus is a thought experiment that raises the question of whether a ship—standing for an object in general—that has had all of its components replaced remains fundamentally the same object.

[2] One theory suggests that the abyss could refer to the same abyss in Night of Starfall, which describes a place akin to Limbo. 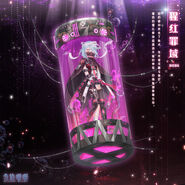 Censored version on the Chinese server.
Add a photo to this gallery

Retrieved from "https://lovenikki.fandom.com/wiki/Scarlet_Sin?oldid=143400"
Community content is available under CC-BY-SA unless otherwise noted.