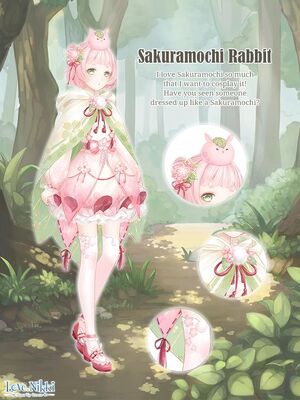 I love Sakuramochi so much that I want to cosplay it! Have you seen someone dressed up like a Sakuramochi?

Sakuramochi Rabbit is an Apple suit that appeared in the Let's Hanami Event and can now be obtained through Recipe Crafting.

I decided to dye hair pink! For hanami of course. 'I'll become the perfect Sakuramochi!'
– Beat of Thought


I love Sakuramochi so much that I want to cosplay it! Have you seen someone dressed up like a Sakuramochi?'
– Sakuramochi Maid


This is the most difficult part in the suit. You have to paint the vein stroke by stroke!'
– Sakura Leaf Cape


It will be a lot of walking for hanami, so I chose this pair of shoes with low heels.'
– Wander in Spring


A doll made of cloth scraps. The original idea is a rabbit, but it turned out to be a Sakuramochi.'
– Sakuramochi Rabbit


Put Sakuramochi on the head! But I gave up at last. Whatever, a real flower is better!'
– Petal Dance


People used to say my cheeks bounce like Sakuramochi. I used to hate that, but now I love it.'
– Soft Cheeks

Sakuramochi (桜餅) is a Japanese sweet consisting of sweet pink-colored rice cake (mochi) with a red bean paste (anko) center, and wrapped in a pickled cherry blossom (sakura) leaf. The suit describes a girl who is obsessed with sakuramochi, to the point of cosplaying it during hanami (cherry blossom viewing).

Retrieved from "https://lovenikki.fandom.com/wiki/Sakuramochi_Rabbit?oldid=161713"
Community content is available under CC-BY-SA unless otherwise noted.