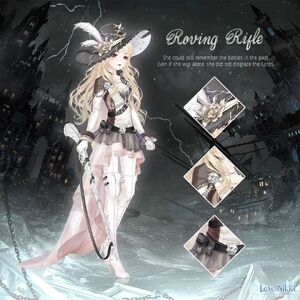 She could still remember the battles in the past. Even if she was alone, she did not disgrace the Corps.

Roving Rifle is a Pigeon suit that could be obtained via Evolution of its parts, which can be obtained by Reconstruction.

In the snowy night, a Pigeon traveler walks into a tavern in the wilds, bringing in the air of frost and danger.
– Midnight Killer

Falcon Legion was a name everyone knows, but now, nobody would cast an extra glance at the badge on her coat.
– Glory of Legion

With her coat dusted on the journey, her mind remains clear and sharp. She knows this will end soon.
– Rose Compass

Before the next dawn, Galil believes she could bring the target to the punishment.
– Shot at Dawn

Looking at the wine glass in her hand, Galil counting the name list in her mind. Only one last name is not crossed.
– Last on the List

From under the cap brim, Galil inspects the other guests in the hall, including her target.
– Wings of Wanderer

Thirteen bullets for thirteen betrayals. The last one will end all these.
– Fire of Wilds

By the candlelight, Galil carefully checks her weapon. Her hand is steady and agile.
– Midnight Killer - Rare

One by one, her comrades were gone. She's the only survivor, so she has to carry the burden for the whole team.
– Glory of Legion - Rare

The enemy fled into the wilds, but Galil gave him a gun and a chance of fair duel.
– Rose Compass - Rare

One falls to the gunshot, and the other survives to see the sun of the second day.
– Shot at Dawn - Rare

Within the range, she has never missed. In the name of her honor, she will bring her enemy to justice.
– Last on the List - Rare

Her eyes sharp like a falcon's, 'After everything you have done, you must have known this was coming.
– Wings of Wanderer - Rare

There are many reasons to fight. Some for gold, some for dreams, but for Galil, it's about her lost comrades.
– Midnight Killer - Epic

Those days of fighting together are like an eternal fire burning in her heart. She will protect the honor.
– Glory of Legion - Epic

Life and death, past and future, she sought her fate in the uncharted area and the gunshot will light up the way.
– Rose Compass - Epic

The pain intensifies with each shot, but when she pulls the trigger, she is ready to not see the sun tomorrow.
– Shot at Dawn - Epic

Back to the tavern, the owner is dozing off on the counter. Nobody knows what happened tonight except for the snow.
– Last on the List - Epic

As the pain crawls to every part of her body, she feels unprecedentedly peaceful.
– Wings of Wanderer - Epic

Charged with decisive faith, the bullet pierces the armor and sets off a firework of blood.
– Fire of Wilds - Rare

Roving Rifle is about Galil. She was a member of the Falcon Legion, which used to be a widespread group. Now, nobody would cast an extra glance at the badge on her coat. It was a snowy night when she entered the tavern in the wilds. While her coat was dusted by the journey, her mind remained sharp and clear. Frosty air was not the only thing she brought with her — she brought danger in as well.

Galil inspected the other guests in the hall from under her cap brim, including her target. Looking at the wine glass in her hand, she counted the list of names in her mind. There was only one last name which was not crossed. Before the next dawn, Galil believed she would bring punishment to her target.

Out of everyone in the Falcon Legion, she was the only survivor. Her comrades had fallen one by one, so she was the only one left to carry the burden for the whole team. There were many reasons to fight: some for gold, some for dreams, but for Galil, it was for her lost comrades. She would protect the honor, because those days of fighting together were like an eternal fire burning in her heart. Whether it was life or death, past or future, she sought her fate in the uncharted area and the gunshot would light up the way.

By the candlelight, Galil carefully checked her weapon. Her hand was steady and agile. It was time to confront her target. Her eyes sharp like a falcon's, she said, "After everything you have done, you must have known this was coming."

While the enemy had fled into the wilds, the man must either have stayed or been left behind. In order to give him a chance for a fair duel, she gave him a gun. And so, their gunfight began.

She had never missed within range. In the name of her honor, she had vowed to bring her enemy to justice. Charged with decisive faith, the bullet pierced the armor and set off a firework of blood. That did not mean she was left unscathed, however, because pain crawled to every part of her body. But even so she felt unprecedently peaceful. The pain intensified with each shot, but when she had pulled the trigger, she was already ready to not see the sun tomorrow.

In the end, one fell to the gunshot, and the other survived to see the sun for a second day. It is unknown who exactly won, but meanwhile, back at the tavern, the owner was dozing off on the counter. Nobody knew what happened that night except for the snow.

Retrieved from "https://lovenikki.fandom.com/wiki/Roving_Rifle?oldid=146433"
Community content is available under CC-BY-SA unless otherwise noted.