Love Nikki-Dress UP Queen! Wiki
Register
Don't have an account?
Sign In
Advertisement
in: Suit, Story Suit, Event,
and 5 more

Nina was determined that she'd work harder to enrich herself on the journey.

Rosy Tour is a Story Suit that could be obtained via the Absurd Tale Event.

Like every spoiled girl, Tina had countless dreams about the future, her world was like a colorful candy wrapper.
– Time and Tide

Tina's parents died in an accident, and her world collapsed. The house was silent in the twilight.
– Snow Rose Psalm

No matter what happened, Tina could have sleep well at home. As she knew her parents would support her dream.
– Fantasy Preamble


Tina drowned in the pain of losing the love of her life. She kept dreaming of her mother releasing her hands.
– Dream Poet


She remembered the chitchat at the dining table, the once close warmth finally reduced to a distant phantom.
– Song of Star and Moon


The girl's glass candy wrapper shattered. Turned out what she couldn't let go was the simple days with her parents.
– Silent Snowy Night


Tina sorted her parents' belongings slowly but time suddenly became endless and she couldn't even finish one thing.
– Rhythm of Light


In the drawer was a planned trip route diary. Father drew many cities on it and each page was full of entries.
– Time Guest


They'd planned to travel together. But with her parents gone, it seemed like an old good dream no one cares about.
– Rose Song


She saw unfamiliar sceneries, and at the greetings of kind passersby, she smiled - I had fulfilled our promise.
– Hope and Pray


One night, Tina dreamed of her mother writing the diary. She stood carefully afar, hoping the dream to last longer.
– Shimmering Starry Night


Tina returned home as her trip ended. In the mailbox was a stack of postcards, bearing witness to her rosy youth.
– Rosy Tour


Tina decided to go on this journey alone with her parents' diary to all the places they planned on going to.
– Winter Ferret


Tina kept a diary during her journey. As if she was writing to her parents, along with pictures as her thoughts
– Lights at Street Corner

Nina made up her mind to travel because of the play 'Dream Travel'[1], which she shed tear for at its conclusion.
– Time and Tide - Night


What happened to Flynn had always been on her mind. The past had gone and she wasn't ready yet for the future.
– Snow Rose Psalm- Night


Life and death coexist. People chase one another in a loop. Dreams are merciful as it allows reliving good.
– Fantasy Preamble - Night


That was when she realized she'd mature only if she let it go. She had more important tasks than licking wounds.
– Dream Poet - Night


Everyone had things to do for the redemption of the soul, something that others might not understand.
– Song of Star and Moon - Night


In order not to let Flynn and Orlando down, she shall become a better Nina by the end of this trip.
– Silent Snowy Night - Night


Nina was determined that she'd work harder to enrich herself on the rest of her journey. A new day has dawned.
– Rhythm of Light - Night

[1] "Dream Travel" does not refer to the suit Dream Travel in this context. The suit name is different from the one mentioned in the description in the Chinese version of the game. 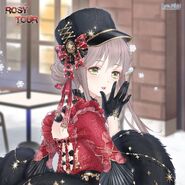 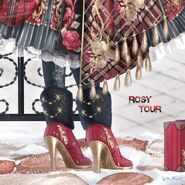 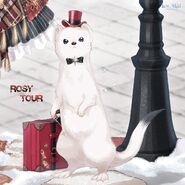 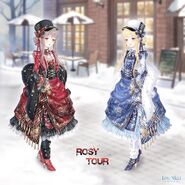 The unposed suit and its customized version