From the colorful palace of fashion, an outfit leaves the first impression. Every free soul can show her own style.

Romantic Moment is a Pigeon Kingdom suit that appeared in the first season of the Barbie Event. It was created as a collaboration to celebrate Barbie's 60th anniversary. It has been confirmed that this suit will not return.

Barbie has a unique fashion style. While she may be demure, she's ready to make new friends.
– Light Blonde

The two became fast friends. The other Barbie is enthusiastic, straightforward, just like the warm sun.
– Azure Dream


A new friend approached with a bright smile, 'Hello! Barbie! We have the same name!'
– Bright Encounter


Encouraged by a friend, she reexamined her dream to be a model. It changes herself and people surrounding her.
– Crystal of Change


Even after countless failures, her heart didn't change. 'May my style help more girls find their own beauty.'
– Gem of Origin


Barbie tosses and turns on the bed before the interview. She seeks her friend and is encouraged.
– Facets of a Jewel


An invitation from Wind is a chance to be the lead model of the next season, her confidence wins her the spot.
– Fresh Wind


She used to be shy and demure. No longer timid in crowded places, she has found many friends.
– First Model


Her special sense of style gives her a uniqueness. This might deter people, but not a cat.
– Instinctive Insight


From the colorful palace of fashion, an outfit leaves the first impression. Every free soul can show her own style.
– Colorful Palace


Fashion isn't about shallow extravagance, but a way to express yourself. Barbie believes everyone has their own charm.
– Barbie's Style


On the poster, she is an invincible queen. Looking skyward she puts away the poster, waiting to show her friend.
– Romantic Moment


The girl in front of camera wears the featured dress. Her confident look accentuates its noble gorgeousness.
– Fate Diamond

In the story there are two girls named Barbie: one who strives to be a model and one who wants to explore the universe. Romantic Moment is about the former. While she may have been shy and demure—being timid in crowded spaces—she was ready to make new friends, and so she did: she was approached by the other Barbie with a bright smile. That Barbie was enthusiastic and straightforward, just like the warm sun. Later on, she made lots of friends.

The Barbie of Romantic Moment had a very unique fashion style, which might've deterred some people—but not a cat. Even after experiencing countless of failures, her heart didn't change, for she truly wished to help other girls find their own beauty. The other Barbie was of big support to her, having encouraged Barbie for her interview when she was restless. Thus, Barbie decided to reexamine her dream, changing herself and the people around her. Having received an invitation from Wind, she managed to secure the role as lead model thanks to her confidence, and so in front of the camera she wore a noble gorgeous dress. She believed that every soul could show their own style and that fashion isn't about shallow extravagance but a way to express oneself, for everyone has their own charm. And so, on the poster, she looked like an invincible queen. When she tucked it away she looked upwards to the sky, waiting to show it to the other Barbie in space.

The Barbie that the suit was based on[1] 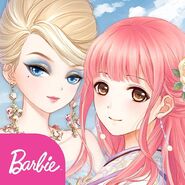 The game icon during the collaboration event