Rolterdan is a small city in Apple Federal, best known for its role in the Nine-Day War. It is near the border of Apple and Pigeon Kingdom.[2][3]

King Sayet passed away, leaving behind three treasures. Miraland nearly broke out into war over them, and decided to resolve the situation with a styling contest that lasted nine days. This was held in Rolterdan, with stylists coming from all over the continent to compete. However, two newcomers won the competition, Queen Elle from Pigeon and the mysterious Hostess L.[6]

The Nine-Day Twilight (九日黄昏, Jiǔ rì huánghūn) site is where the Nine-Day War occurred. There is a monument erected to it here, which contains inscriptions that tell the history of the war.[7]

The Rolterdan Museum (鲁尔特丹博物館, Lǔ ěr tè dān bówùguǎn) is a renowned art museum. It has over three million exhibits displaying the art history of the Apple Federation, and it showcases art, sculptures, designs, and apparel.[7] It's the largest museum in the country, and it spans over four blocks.[3]

The Piero Theatre (派阿罗歌剧院, Pài ā luó gē jùyuàn) is the largest and oldest theatre in the Apple Federation. It is a large, magnificent building with a domed ceiling painted with murals.[7]

The Ash Tree Institute of Design is a designing and styling college founded by King Sayet.[8] Though located in Rolterdan, it doesn't resemble structures from either Apple or Pigeon.[9] 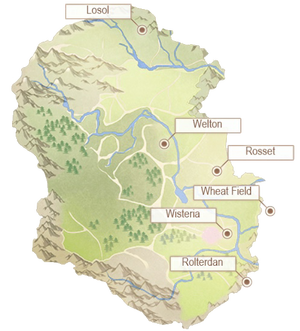 The site of the Nine-Day War in the year 680

The Rolterdan Museum at night 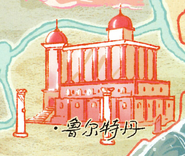