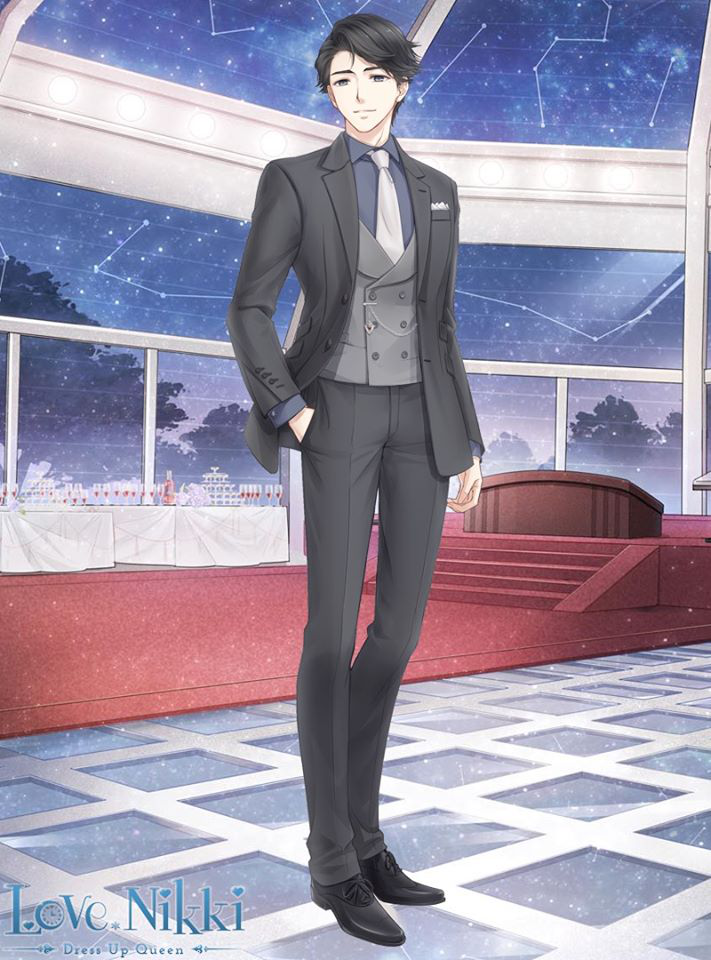 Chairman of the Mercury Group[1]

Reid is a character that appears in Love Nikki. He is the chairman of the Mercury Group, an influential financial group in Apple.

Reid is a sly, charming man. He has a polite manner of speaking and clearly has used this to his advantage, but it's shown that he has a vengeful side: seeing his enemies defeated or trapped pleases him.[5]

Reid worked as the senior design director at Rawding Academy during this year, and Kimi studied under him as she created a dress for an exhibition. The two of them did not have a close relationship, and Reid criticized Kimi's design when she asked for his opinion one month from said exhibition.[2] Some of Kimi's groupmates found this unfair since he didn't criticize the designs of other groups.[6]

Reid later went to visit Kimi where she was helping out at the Children's House, and they didn't talk about the design. Instead, they went back to where the children were and Kimi lit a sparkler for him at his request. Reid made animal shapes with them, surprising Kimi and wowing the kids.[4]

When Kimi later expressed her doubts and stresses about the upcoming exhibition, Reid reassured her, giving her a handkerchief and insisting that she needed a break.[7] Before he left, Reid gave a sakura-themed brooch to the children and asked them to give it to Kimi for him as a birthday present.[8] Following that, Reid and Kimi were much more friendly towards each other, surprising Kimi's classmates.[9]

After the League Till's attack on Cloud City, Reid joined forces with Nidhogg in a plot to steal the White Blossom.[10] He or those he was working with convinced Chairman Schiller to give up the dress,[11] and it was moved from the possession of the Apple Federation Apparel Group to the hands of Reid via a banquet called the White Blossom Banquet. At the banquet, he spotted Kimi in disguise, who was there to save the White Blossom. He danced with her, presumably to distract the crowd, while the White Blossom was stolen.[12]

When the dress was intercepted by Kimi, she used it to lure Reid to her and confront him about his motives. He still tried to persuade her to hand over the White Blossom, insisting that it would only bring danger to her and that he could help her be reunited with her father.[13]

Reid was the senior design director while Kimi attended Rawding Academy in the year 678. They had a frosty relationship, and Reid was more critical of her designs than he was with the designs of others.[6] However, after a heart-to-heart about their childhoods and the stresses Kimi was under,[7] they were friendly with each other.[9] Reid held Kimi and her happiness in high regard, considering he also gave her a sakura-themed brooch for her birthday[8] and began a tradition of fireworks at Rawding for her.[14]

Serving as the chairman to the Mercury Group, Reid generally did not interfere with the AAG's business out of respect for her, and she trusted him.[15] However, during the White Blossom Banquet, he pressured her into dancing with him while she is in disguise, and during the dance her hairband fell out and he kissed her (possibly to hide her face).[16] Still, Kimi seemed to believe he has her best interests at heart, saying that "there didn't seem to be a better solution".[12] When she realizes that Reid is the one behind the whole mess with the Apparel Group, she is bitterly disappointed, and she called trusting him "the most foolish thing [she] could have ever done".[10]

Reid and Kimi in 17-9 To Disperse Love Songs

Retrieved from "https://lovenikki.fandom.com/wiki/Reid?oldid=101799"
Community content is available under CC-BY-SA unless otherwise noted.