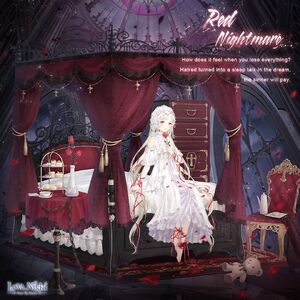 How does it feel when you lose everything? Hatred turned into a sleep talk in the dream, the sinner will pay.

Red Nightmare is a Pigeon suit that appeared in the Fate Trio Event.

Her finger gently streaks the frosty glass. The cold feeling reminded her that everything is different.
– Blood Night

When she closes eyes, she still sees the face of the boy. But family feud took everything away
– Soul Wail

How does it feel when you lose everything? Hatred turned into a sleep talk in the dream, the sinner will pay.
– Formless Yoke

At this time, the red curtain before April slipped down slowly, closing her world before her eyes.
– Corrupted Feast

April was born in the most glorious Demon Hunter family. She saw the bright lights, and the darkness today
– Vanished Flower

In the night when she was deserted by the world, she cut her finger and chanted the spell. Kindred Cardis appeared.
– Desire Abyss

Though she's been sealed for ages, the enmity is still daunting. Somehow, she answered the request of April
– Requiem of Freedom

Thereafter, April stepped on the road of vengeance. She avoids the figure that gave her warmth.
– Death of Rose

As vengeance came to end, April went quieter. She was the demon hunter, but she now can only rely on the kindred.
– Kiss of Curse

When that man showed up again, the smile was gone. The eyes looking at Cardis were filled with disdain and enmity.
– Long Dream Wake

There is only one left. Cardis's voice is like a bewitching song, alluring people into the bottomless abyss.
– Blood Cage

The fire incinerated the sinner. April looked up, it's about dawn and everything will embrace new birth.
– True Lie

She once loved a young man, but then she found their love is so weak and fragile.
– Dusty Snow

The contract is like a formless chain. Kindred won't grant her death, and she will never earn her redemption
– Red Nightmare

April was born in the most glorious Demon Hunter family. She was in love with a man named Manly, and he loved her back, but due to the two's family feud he was forced to leave her. Manly's family ended up killing everyone in April's family, leaving her all alone. Blinded by rage and hatred to the point where she slept talked about "the sinner will pay", she summoned a kindred named Cardis—a bloodthirsty vampire. April succeeded in her quest for revenge—presumably by burning Manly's family—but was still bound to Cardis, who held her captive in her own manor as revealed in Blood Beckon.

When Manly learned about April and came back to see her, he was disgusted by the sight of Cardis. His smile was gone and he was intent on killing the kindred. "There is only one left" might refer to Manly being the last target for April, as she found their love weak and fragile as well as him being the only "sinner" left. It could also refer to Cardis taking full control of April, but as Manly fought Cardis, he lost and was incinerated by fire.

After Manly's death, dawn was about to come and it is mentioned that "everything will embrace new birth", possibly referring to the end of Moon Justice concluding how their story was not over.

Retrieved from "https://lovenikki.fandom.com/wiki/Red_Nightmare?oldid=132076"
Community content is available under CC-BY-SA unless otherwise noted.