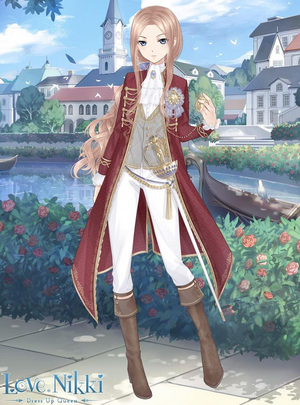 Ransa is a character in Love Nikki. She is a member of the Iron Rose Stylist Legion, a group of talented stylists from the Pigeon Kingdom which used to serve the queen Elle.

Her normal clothes are typical of the Pigeon Kingdom. They consist of a dark red coat with golden trims and details, a lavender gold medal, a silver vest with gold trims, details, and buttons above a white pirate shirt with a neck jabot and a light blue gem pin, white pants and tall brown boots with golden details. Her hair is tied into a ponytail with a lavender ribbon. She also wears a golden and lavender details at her waist that holds the sheath of her sword on her left. Typically her facial expression is shown to be a scowl.

While she is in the Pota tribe, she wears her wavy brown hair down. She is dressed in blue tribal clothes and has face paint, a blue feathered headpiece, and brown boots. She carries a tall staff in her hand.

Ransa is an extremely sneaky and proud young woman, shown to be dismissive and patronizing to those who disagree with her, similar to the other members of the Iron Rose.[4] She has been shown to do things typically considered immoral in order to achieve her goals,[1] like poisoning people and manipulating them for her own gain.

Ransa is also quite cynical, and bitterly aware of how Miraland is not a beautiful and perfect world. When Nikki laments the fact that she couldn't save Lunar, Ransa berates her for her naivete and tells her to pick herself up.[5]

Ransa was born as the only daughter of a clan, and was taught by the best teachers. Though she was young, she also led the clan. She escaped the conflicts she faced by reading fantasy novels, which were totally different from her own life. The only thing that really cheered her up was watching fish swim in the river.[3]

Ransa achieved a lot for her clan and brought it glory. Her future was bright, and her father wanted to hand over his position to her.[3]

Ransa declined the offer, and snuck out of her family's manor on the day of the adult ceremony to seek a life like that in her fantasy novels, heading for the ocean. Her family immediately posted notices searching for her, and she considered abandoning her adventure to return to them. However, the next day, their messages changed to announce that Ransa had been kicked out, to her relief.[3]

An old captain once told her to follow her heart and she would never get confused, and Ransa always remembered that. She always sought out freedom, and would do whatever it took to achieve it.[3]

Sometime later, she became a member of the Iron Rose Stylist Legion led by Queen Elle. After that, Ransa went to the Pota tribe in the Republic of Wasteland, and impressed the chief with her foreign styling skills. She was appointed as the archpriest of the tribe.[1]

Ransa went on to feed the chief an elixir that put him into a coma and imprisoned Tuda, the son of Pota's chief, but he snuck away.[1]

After he found Nikki, Ransa was challenged by them to a styling battle. Nikki defeated Ransa, who left the antidote with them and disappeared.[4] After waking up, the chief of Pota Tribe revealed that Ransa had left him a badge. Nikki and her friends examined it and were surprised to discover that it was the Iron Rose badge. They hypothesized that Ransa came to the Wasteland to find designs.[6]

After Nikki tried and failed to defeat Nidhogg following Lunar's death, Ransa appeared with the rest of the Iron Rose.[7] It turned out that Queen Elle sent the members of the Iron Rose to Cloud City in an airship in order to assist Nikki. Ransa didn't know why, but she was devoted to following the Queen's orders.[8]

They showed up in Cloud City and gave Nikki the Dawnblade.[9] It is not clear how they got the legendary sword that allowed Nikki to defeat Nidhogg. After Nidhogg accepted defeat and Lunar's body was retrieved by Louie, Ransa and the other Iron Rose members took Nikki onto their airship to leave Cloud City.[5]

While en route to Lor River City, Ransa, Nikki, and the other Iron Roses discussed their next course of action.[10] Ransa advised that investigating Nidhogg's magical necklace was their best bet.[11]

They arrived at the Pigeon camp and encountered Debbie, who was angry that they went to Cloud City without her. Ransa told her that they brought Nikki, saying that Debbie could teach her a lot.[12] After they competed twice, Ransa and the other Iron Roses parted from Nikki.[13]

After the wake of the Iron Rose's disbandment, Ransa join forces with Nikki and Momo to search for King Sayet's designs.[14]

During the Desert Mirage event, Ransa, Nikki, and Momo traveled to Mist Sand in order to look for supplies to craft one of King Sayet's treasures. While they are there, they encountered the Goddess of Gold, Vnet. Ransa asked her for assistance in crafting, but Vnet only said that Nikki will fulfill her wish, and disappeared.[15]

Ransa and Mela bicker with each other, especially about their duties within the Iron Rose.

Ransa and Sherry were worked together in the Iron Rose, but later they took different paths after the group disbanded, with Sherry taking a more passive role in deference to Queen Elle and Ransa pursuing the truth behind why it was ended.

Ransa's original sprite from Chapter 13, which was not shown on the International server, next to Tuda
Add a photo to this gallery

Retrieved from "https://lovenikki.fandom.com/wiki/Ransa?oldid=126102"
Community content is available under CC-BY-SA unless otherwise noted.