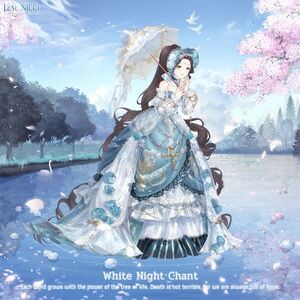 Unknown (over a thousand years ago)

Guardian of the Forest Epics

Rachel is a character in Love Nikki. She is the guardian of the Forest Epics in Stele Forest and the sister of Elaine.[1]

Rachel has long, dark brown hair she keeps tied up and warm brown eyes. She wears an elaborate, classic turquoise Pigeon-style dress with an elaborate bonnet. It's said that Elaine, her sister, resembles her.[2]

Rachel was always the more playful one between her and her sister. She is also very loyal to her. However, as she learned to live parted from Elaine, she grew up and became very dedicated to her mission of recording history in order to improve the lives of those in Pigeon Forest.

Rachel lived with her sister Elaine in the Pigeon Forest. They had a good relationship, though Rachel was much more playful and carefree than her sister, who acted as the healer for the elves and spent much more time studying.[2]

She was there for the war between Kindred and Elves, doing what she could from the battlefield, but it wasn't enough. The previous Epic Guardian died, and Elaine was left distraught. Elaine became the new Epic Guardian and spent her time wandering mournfully between the tombstones. She carried the Tome of Time that she'd inherited with her all the time.[2]

A particularly terrible battle occurred between Kindred and Elves, which upset Rachel's sister Elaine greatly. nightmares began to plague Rachel, as well as others living in the forest. In one, Elaine appeared, pushing her away before falling wordlessly through the lake. Rachel woke up only to discover it hadn't been a nightmare at all: Elaine had left when the Kindred were banished, going with them to the underworld, Shadow City. This left Rachel in Pigeon Forest, feeling betrayed by her sister and intimidated by her new responsibilities.[2]

Rachel eventually did assume Elaine's responsibilities, reading the books she had read and taking on her healing duties. However, she soon began to assume her identity, and believed that she was Elaine. Prince Chloris intervened one day, asking Rachel if she remembered who she was, to which Rachel replied, "Who's Rachel? I'm Elaine, the guardian of the forest epic."[1]

Later that night, Elaine herself appeared in the forest as a spectre, worried about Rachel's well-being. Rachel stared at her sister in disbelief as she realized that she wasn't Elaine at all. She soon noticed Rachel's worried expression and felt guilty for making her sister worry about her. She compared herself to a weak child, especially in relation to her sister, who was so strong-willed.[1]

Elaine opened the Tome of Time for her, causing the history of both the Pigeon Forest and Shadow City to be chanted through the air around them. After it was done, Rachel hugged Elaine, and she disappeared again from within her arms as the book's strength had subsided. Rachel began to cry, her tears falling onto her knees and the ground as she reeled from the experience.[1]

From that point, Rachel made a vow. She decided to carve history into the tombstones, like her sister had put history into the Tome of Time. She didn't want the history to be forgotten, and she wanted to guide the descendents of the forest so that they wouldn't make the same mistakes again.[1]

Rachel stayed in the Stele Forest for many years, and was able to communicate with her sister. One day, Elaine told her that two human girls and a cat had just left her, referring to Nikki, Mela, and Momo. When Prince Chloris came looking for them, Rachel passed the information on. This allowed them to determine Nikki was in Shadow City and rescue her.[3]

Rachel and Elaine have an immensely close bond, despite their different personalities, with Elaine being the serious, protective one and Rachel being the carefree and playful one. Elaine sacrificed herself by going to Shadow City with the Kindred, though Rachel felt anything but comforted by being separated from her sister. Their separation was extremely hard on Rachel, who convinced herself she was Elaine in order to cope until Elaine intervened. However, Rachel dedicated herself to recording their history in the hopes that one day they could be together again and float through the lake peacefully like they used to.[2][1]

Retrieved from "https://lovenikki.fandom.com/wiki/Rachel?oldid=143752"
Community content is available under CC-BY-SA unless otherwise noted.