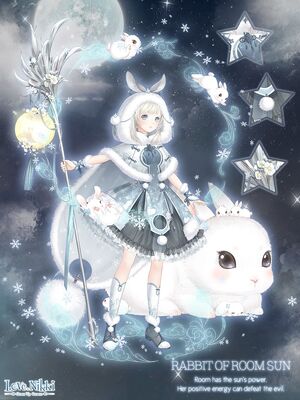 Room has the sun's power. Her positive energy can defeat the evil.

Rabbit of Room Sun is a Stars suit that appeared in the third season of the Star Secrets Event.

Back to Stars suits

Room has the sun's power. Her positive energy can defeat the evil. Compared with other Mansions, she is really dainty and cute.
– Mysterious Song

Room looks into the distance from the clouds and sees a figure on the horizon who seems lost and lonely.
– Exquisite Snow Cloak

Room locates in the dragon's belly which is responsible for digesting, so she is a lucky god who can remove all ill fortune.
– Auspicious Omen Cloak

The snowing town is small but particularly peaceful. They miss the Mayor's boy who had left home and expected his return.
– Heaven Horse Sock

It's said that the child lost in the ocean and longed for coming back. But boats can hardly sail on a windless hot summer.
– Mysterious Boot

After their wish came true, Room restored her playful smile. She strokes the soft hair of Exqus and sings a song of blessing.
– Mysterious Pedal

Exqus bunny guided him through the big snow. He skelped down the road and recalled the plum drink and colored silk back home.
– Auspicious Cloud

The child has long forgotten where home is on the vast sea. He rests on a wet wooden boat, gradually sinking into a cold dream.
– Mysterious Hand Cuff

It was snowing all night. The Mayor opened the door as usual. The long-lost boy nestled against a snow-white rabbit, dreaming.
– Dreams Drawing Dream

Room is humming a song, a magical stick gleaming in hand. Whose nostalgia and prayer disturbed the god in heaven?
– Hook and Bell Cane

Room turned ice into a white rabbit, named it Exqus and fed it with snow, then conjured drifting snow and sent it to the world.
– Fairy Lying Rabbit

Room has the purist soul and power. A color as pure and clean as a cold pond appears in her eyes.
– Cold Pond Eyes

Rabbit of Room Sun is about the goddess Room, who is located in the fourth mansion of the eastern Azure Dragon; to be more precise, in its stomach, giving her the ability to remove all ill fortune. She has the Sun's power, and her positive energy can defeat the evil. Compared to the other mansions, she is dainty and cute; having a purist soul and power.

800 miles to the east, Room found a lost and lonely small boat floating on the sea, which must have come from a small, prosperous city under heavy snow, described 800 miles to the west. It was peaceful but they missed the Mayor's boy who had left home and expected his return. From ice she created a white rabbit, called it Exqus and fed it with snow before sending it out to help the boy drifting in the ocean, who had gradually sunk into a cold dream. The Exqus bunny guided him through the snow and as he skipped down the road, he recalled the plum drink and colored silk back home. It had snowed all night; when the Mayor opened the door as usual, the long lost boy was nestled against Exqus, dreaming.

Retrieved from "https://lovenikki.fandom.com/wiki/Rabbit_of_Room_Sun?oldid=146400"
Community content is available under CC-BY-SA unless otherwise noted.