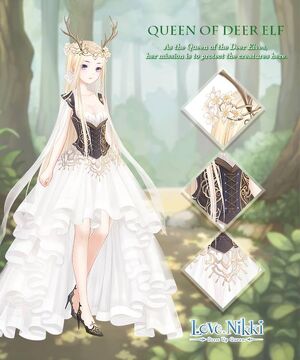 As the Queen of the Deer Elves, her mission is to protect the creatures here.

Queen of Deer Elf is a Pigeon suit that first appeared in the Midsummer Night's Dream Event. The suit is craftable and its recipes can be bought in the Store of Starlight.

The old deer king has deceased. As his only heiress, the princess has claimed the throne and ascended as queen.
– Noble Deer Queen

Elves stay clear of the mortal world and live in the Pigeon Frost protected by gods for their whole lives.
– Deer Antler

With the most beautiful antlers in the forest, Queen of Deer Elf is always the best.
– Elf Queen's Antlers

Only an elf would have such crystal clear eyes like gems.
– Extraordinary Elf

The suit describes the Queen of the Deer Elves. She ascended to the throne when her father, the deer king, died. She is devoted to protecting the creatures of the forest. It's said that she has the most beautiful antlers and crystal clear eyes. 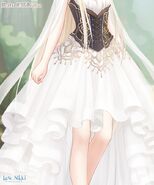 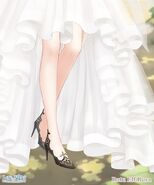 Retrieved from "https://lovenikki.fandom.com/wiki/Queen_of_Deer_Elf?oldid=146398"
Community content is available under CC-BY-SA unless otherwise noted.