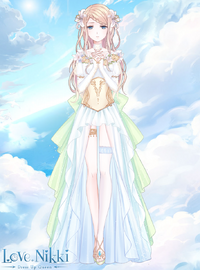 Queen Nanari is a character in Love Nikki. She is the current Queen of the Lilith Kingdom who brings Nikki and Momo to Miraland and the older sister of Royce. However, she abdicated due to sickness prior to Nikki's arrival in Miraland.[5]

Nanari is a beautiful, slender and waifish young woman who seems to be in her mid twenties with long blonde hair, blue eyes and rather delicate looks. She has lilies in her hair and some flowers in the cleavage of her dress. Said dress has a white top, a golden corset around her stomach, a pale blue skirt that uncovers the front of her legs in a "showgirl skirt" cut, and a pale green bow on the back. She also wears two leg bands (one golden, the other pale blue) and gemmed gold sandals.

For her first styling battle with Nikki, Nanari switches her clothes to simpler ones: a light blue headband with a bow and a white pompon, a light blue sweater with more white pompons, a light green pleated miniskirt, and brown folded-over boots.

Not a lot is revealed about Nanari's own person, but what has been shown states that she is a very gentle person who appreciates kindness in others and she is also very well-loved by Royce (Nanari's younger brother) and the populace of Lilith.

It is said that Nanari grew up under the old king's protection,[6] and she was encouraged from a young age to use her life to protect her people and to be a benevolent leader.[7] Before she became the queen, she was a princess with simple tastes, such as desserts and proms.[8]

After ascending the throne, Nanari abdicated due to sickness.[5] She appointed Nidhogg as Prime Minister of Lilith to handle political affairs.[9] Her brother, Prince Royce, assisted her as well, though he hardly got to see her.[2] She gave him a casket that allowed him to send phantom messages using the guardian spirit of Lilith.[10]

Nanari summoned Nikki from Earth to Miraland in the year 680, bringing her to a forest outside Wheat Field, Apple. Though Nikki did not understand what was going on, Nanari told her that she would soon understand, and challenged her to her first styling battle after giving her some basic clothes. After the battle, she told Nikki she wasn't strong enough to accompany her, but wished her luck on her journey.[1] When Bobo heard that Nikki's appearance was due to Nanari, she suspected that Nanari had used "forbidden arts" to bring Nikki there.[5]

During the Fantasy Styling Contest of the year 680, Nanari was in her bedroom, but after Nidhogg rebelled, she disappeared. Royce suspected that soldiers had kidnapped her.[11] Her current whereabouts are unknown.

Royce is Nanari's younger brother and heir apparent. While he dearly loves his big sister, he feels stifled and asphyxiated by the high responsibilities that he's had to take ever since Nanari has been sick, so he ends up running away from the court. He returns later in the story to keep the realm stable and when Nanari isn't found during the rebellion, he has to take over the crown and become the King of Lilith Kingdom in her absence.

Neva is a member of the Royal Guard, under the orders of Queen Nanari and the Royal Captain Eruca. It's possible that Nanari sent Neva to follow Royce, keep him safe and try convincing him to come back to the capital.[12]

Nanari summons Nikki to Miraland using her shadow, hoping that she will be able to help change Miraland's fate.[1] However, after their first meeting, they do not see each other again.

Retrieved from "https://lovenikki.fandom.com/wiki/Queen_Nanari?oldid=104880"
Community content is available under CC-BY-SA unless otherwise noted.