Love Nikki-Dress UP Queen! Wiki
Register
Don't have an account?
Sign In
Advertisement
in: Characters, Antagonists, Females,
and 6 more
English

アイリ女王
Queen Elle of Pigeon[1] is a secondary antagonist in Love Nikki. She is the queen of Pigeon Kingdom and former leader of the Iron Rose Stylist Legion.

Queen Elle is a slender, pale, beautiful woman in her early 20's who has pale skin, dark purple hair and purple eyes. She tends to wear elegant dresses in dark and red tones with white ruffled accents and golden details, silver necklace with a red gem, and a golden tiara or a golden crown.

Little is known about Elle as a person, but her reputation seems to be that of a ruthless yet efficient and charismatic ruler, as well as a talented stylist.[16] For these reasons, she is very well-loved in the Pigeon lands[17] yet feared near everywhere else, especially in Queen Nanari's Lilith Kingdom.[2][18] She does seem to have some "fans" in the Cloud Empire, mainly girls who admire how stylish she is.[19]

According to Ransa, she dislikes rituals and ceremonies, and prefers the peace of her rose gardens.[20]

As a child, Elle used to be a gentle and sweet princess who liked to play with her younger sister, Ace. She was also a talented stylist even from a young age.[16]

They grew older and began to plan for the future, traveling across Pigeon to visit orphanages and live with its people, as well as studying and writing reform plans. Their joint goal was to give the people of Pigeon happy lives.[5]

However, the illness and death of her and Ace's father greatly shattered Elle, who stayed by her father's side night and day and could do nothing but witness his physical decay. With time she grew into a much colder girl, much to Ace's sadness.[4]

When Elle was 16 and still the crown princess, she competed in the styling contest known as the Nine Day's War and won two of King Sayet's treasures, having only lost the third one to the mysterious newcomer, "Hostess L". This led her to be known as the "Reincarnated Goddess" and put Pigeon at the center of Miraland politics.[1]

When Elle was 20, she was crowned queen of the Pigeon Kingdom[1] by the archbishop in the Empire Church.[21] She lost no time in forming her Iron Rose Stylist Legion afterwards, named for the cause that Elle visits a little rose in the magnificent rose garden in her backyard often.[6] Those members of the organization, she had them traveling throughout Miraland stealing designs and committing many other dubious acts in her name.[1] At some point they held a victory banquet for the Iron Rose Stylist Legion, at which Elle wore Bling Leaves.

Some theorized that Elle founded the Iron Rose for Hostess L, the other winner of the Nine Day's War.[22]

In this year, the people of Pigeon Kingdom still respected and admired Queen Elle despite the Iron Rose's dubious acts, which struck fear into most others in Miraland.[17] Her influence was far reaching, and in her honor roses were planted in manors and gardens all over Pigeon.[23]

Elle ordered Mela to strike a deal with the Mayor of Moonlit City, in order to have the prized wares of the City itself. The Mayor counteracted this via pretending to side with Pigeon, then tricking Mela and her group into taking fake crafts instead.[2] Ransa, acting under Elle, went to the Republic of Wasteland and drugged Tuda's father in order to obtain power and designs.[24] It was hypothesized by Momo that Elle could have sent the Iron Rose to Wasteland in order to seek the Miracle Scroll as well.[25]

When the North Kingdom broke the years-long truce, directly attacked the Cloud Empire, and later made an alliance with the Apple Federation, Elle sent out three of the Iron Roses (Mela, Ransa, and Sherry, though Debbie was meant to go as well) to both protect Nikki from Nidhogg, the leader of the Northern army, and loan her a powerful sword known as the Dawnblade, which allowed her to defeat said leader.[26][27][28]

After the Iron Rose failed to craft King Sayet's relic, Queen Elle made the decision to disband the Iron Rose.[29] However, Nikki felt that the Queen was using this as an excuse to hide her true reason.[30] She joined forces with Ransa, and together they went into Oren to investigate further.[31] However, they ran into Sherry on the way in, who pretended to offer them help[32] but secretly alerted Elle to their presence.[33]

Nikki and Momo let themselves be arrested by Pigeon guards so they could buy time for Ransa. Instead, they were taken to Elle herself, and she greeted them, "Finally, we meet again".[20]

Elle proceeded to lock Nikki and Momo in a room in her castle, only allowing them to leave if Nikki accepted an offer of hers.[34] Unfortunately, despite Nikki's willingness to tell the truth, she could not accept Elle's offer.[33] Nikki and Momo attempted to escape several times, once with the help of Debbie, but both times were unsuccessful, with Sherry catching them and returning them to the cell. Only when Ace showed up did Nikki and Momo finally escape Elle's tower, but not before a run-in with the queen herself at the top of her tower, in which Ace reminded Elle about their own past before bringing Nikki to safety.[12]

Elle at 16 in Prologue

Elle at 16, inheriting two of Sayet's legacies in Prologue 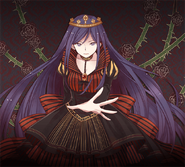 Elle at 20, inheriting the throne in Prologue 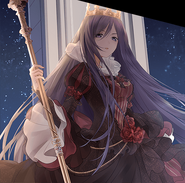 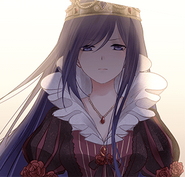 Elle wearing Promise with Sea in the Treasure Island event 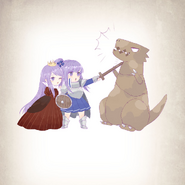 Elle and Ace in the Brave New World event 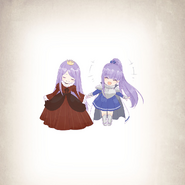 Elle and Ace in the Brave New World event

Elle and Nikki in the Nine-Night Tales event

Elle and Nikki in the Treasure Island event

Elle on the Shining Nikki Impression Snowflake and Memory (雪花与记忆)