Prosperous Reign is a Story Suit that could be obtained the Art of War Event.

[1] My name is Bixiao. I am the embodiment of peace and hope for the mortals.

Chixiao is my sister, the closest family of mine.

She looks so pure and lovely that my light seems nothing compared to her face. The joy and love she can bring to others are what shall be remembered by people.

To describe the kind of beauty she has in her smile, I just can’t think of a word except ‘unparalleled’. It is a kind of smile that I will pay any price to see every day.

However, despite that smile, she’s actually the embodiment of war.

Chixiao and I were responsible for guarding the sky and observing the ground. Each of us was in charge for half the time of each day.

She loved the mystery and tranquility at night and enjoyed observing the mortals in darkness, so I left the nighttime to her, while I myself only appeared in daytime.

As the day and the night never appear together, we didn’t get to see each other often.

But when [an] eclipse appeared, we would have the chance to meet for half a day. It’s quite selfish to say that, but I have always looked forward to the eclipse though it’s an ill omen to the mortals.

We don’t have a limit of life, so I thought our life would just go on this way till the end of time. Isn’t that nice?

But things changed. At first it was the mortals. They seemed to be tired of peace. Their minds became explosive and violence was no longer terrifying. A few wars broke out.

Before long wars spread over the whole land. The mortals have totally gone mad and indulged themselves in rage and the will to fight. The world was in a whole mess.

I was not sure if Chixiao noticed that, as I haven’t met her for a long time back then.

Finally, the eclipse befell. Right after the moon rose, I ran to Chixiao immediately. I really wanted to ask if she knew anything about the wars, and more importantly, to know how she’s doing and tell her how much I missed her.

Behind the heavy fog and the curtains, Chixiao smiled to me. It felt so familiar yet surprisingly strange, and I even saw a kind of charm in her.

'Sister, I miss you so much,' said Chixiao, with a fragrant breath.

She grabbed my arm and surrounded it with her soft body.

Maybe that strange feeling was just an illusion, I thought. She was pure and lovely as usual.

She started to complain about the endless boring days to me with a lovely frowning, and I comforted her with a smile.

But I was then shocked by her words.

'Sister, have you ever tasted war?' The bliss on her face was so real, and I got freaked out. 'That’s amazing! I can’t live without war now. Life has never been so much fun!' She waved her sleeve as she finished the sentence, and a violent vibration and a sound of explosion came from the ground.

Upon hearing the sound, Chixiao couldn’t help but lay on me and started to laugh. She even had to cover her face with the sleeve.

I burst into tears with my heart trembling, and I persuaded her to stop it.

She became very unhappy and pushed me off. SHe was so powerful that I was even knocked into a pillar and fell to the ground.

I coughed up blood while lying on the ground.

Both her nature and strength have awakened. Her power even destroyed my physical form, and I had to attach my consciousness to the universe. In the end, my body was torn apart into four wills of fight: the Wind, the Forest, the Fire and the Mountain.

I could feel my body was screaming out of insanity. I never imagined I would have such a maniacal desire for wars.

Yes, that was the only power I’ve got. This power of war was prepared for the day when Chixiao regains her nature and strength, so that her outrage could be stopped.

Right. Stopping a war with a war.

In this case, I should have stopped Chixiao by taking her consciousness directly, so that her body would just fade away.

But I hated to do that. That’s my dearest sister!

I just couldn’t do it, even if the price would be the whole world. Maybe she was just being playful, like she always was at childhood.

And maybe all I needed to do was to wait for her at home, or to go find her when it’s late. I could always find her.

I deployed a magic circle in the clouds where later I sealed Chixiao with my wills of fight, but I didn’t leave her alone.

My consciousness and our memories were with her by her bed.

Afterwards, she woke up once, when the whole land was covered with wars and a mysterious curse. Back then I was still asleep, and an emperor-like boy woke me up. My consciousness then appeared on the clouds, and once again I sealed Chixiao.

It turned out the boy was a mortal emperor, a farsighted one.

I made a deal with him as a token of gratitude. As long as he or his descendants summon me with blood when wars spread over the land, I will befall again.

After that I fell asleep again.

My name is Bixiao.

Chixiao is my sister, the closest family of mine.

But I sealed her inside the Lingxiao Circle in the clouds with my own body, my wills of fight. Maybe many years later, both of us will wake up again. And I hope by the time we will still have the chance to hold our hands and enjoy the fogs, the rain, the moon, the sun, the clouds, the breeze, every beautiful side of [the] world till the end of time.

The world begins with a chaos. But there was nothing in the sky, until smoke reached the sky from the earth.
– White Hair and Beard

Hope and peace turned into Bixiao. The wars between people became Chixiao.They will remain on earth forever.
– Heavenly Beauty

Chixiao shows up at night. Half of her face remains in the shadow. She points to somewhere, and wars start.
– Red Flowers and the Moon

She is wearing the world's most luxurious clothes, looks like a Queen that succeed to the throne.
– Listening to the Moon

Once a Cloud poet dreamed about her. Stepping over moon, she danced to a tune from the heaven.
– Stepping on the Moon

The golden crown is made from the feather of phoenix by the best craftsman with peony in the middle.
– Red Jade and Cloud

People said she is an immortal and doesn't care about the common people. She also has no idea about love.
– Rotating Years

Lanterns, silks, fines wines and verdant trees, It is like she is living in the fairyland.
– Cold Spring Water

People lose minds in wars caused by Chixiao. All they want is to kill. The war spread fast on the earth.
– Delicate Heart

There is a pattern of golden black dragon on her body, which is the symbol of immortal.
– Dragon Totem

She starts the war on the earth.And enjoys the war with smiling eyes and alcohol.
– Twisting Heaven and Earth

Her long hair is like the darkest night, the gentlest wind, the first rosy clouds above the mountain.
– Careless Goddess

Her body is like the light, the bright moon, the first mist rising from the island.
– Rainbow Phoenix Gown

Her apples are like the deepest sea, the clearest stream, the first dew on the lotus.
– Phoenix's Wings and God's Crown 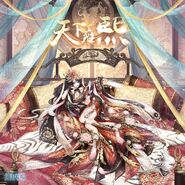 Original version of the suit
Add a photo to this gallery

Retrieved from "https://lovenikki.fandom.com/wiki/Prosperous_Reign?oldid=88609"
Community content is available under CC-BY-SA unless otherwise noted.