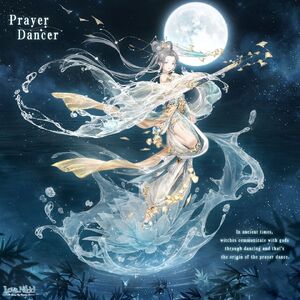 Prayer Dancer is a Cloud suit that could have been obtained through the Garden Secret event.

After makeup is done, the girl in the mirror smiles at him. In a trance, he feels that her sister has never left.
– Temple Flower

Sister once said to him that if he misses her, take a look at the moon. The clear moonlight is her blessing.
– Lisheng's Words

Sometimes, the elders in the palace would take him mistakenly as 'Lisheng'. He would smile and nod.
– Beautiful Makeup


The prayer music passes all over the city. Under the light of the full moon, the ceremony begins.
– Music All Over the City


In the palace, there is an open secret. Whenever someone talks about that cheerful mayor, they would smile.
– Laughter Whisper


He accepted the jade sword from father and the responsibility to take care of the city at the same time.
– Moon and Rainbow


Forget those meaningless troubles. What matters now is the ceremony of Moonlit City! What will be the dance like...
– Buried in Thought


He grows up with his sister. They hanged out in the wilds and snuck out of the city to catch fireflies together.
– Flowing Cloud Grace


When Sister is on the bed, she still worries about the prayer dance. It's a relief to see him dancing like her.
– Frown


A jade ornament sword named 'Snow Moonlight' passed down for generations. It is the token of city guardians.
– Lonely Snow Night


The prayer dance used to be performed by Sister, but this year he will be the one. Sister, will you look at me?
– Guizhou's Thought


Snowball flower opens once a year and would wither overnight, just like the short but beautiful yesterday.
– Snowball Flower


In ancient times, witches communicate with gods through dancing and that's the origin of the prayer dance.
– Wine Ritual Dance


After Sister left, he began wearing female clothing. He shoulders the wishes of Sister and expectations of father.
– Brilliance All Around


The sword flew under the moonlight and slashes the light into thousands of butterflies.
– Butterfly Sword Dance 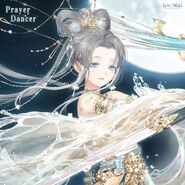 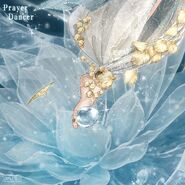 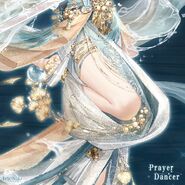 Retrieved from "https://lovenikki.fandom.com/wiki/Prayer_Dancer?oldid=171838"
Community content is available under CC-BY-SA unless otherwise noted.