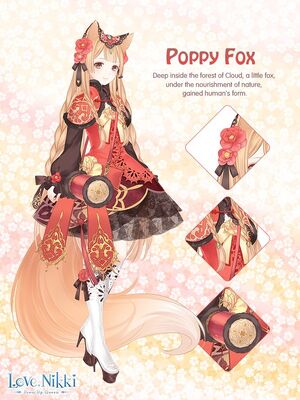 Deep inside the forest of Cloud, a little fox, under the nourishment of nature, gained human's form.

Poppy Fox is a Cloud suit that can be obtained by recharging $4.99 worth of

or more from November 8th to November 14th, 2017. It is now available in the Clothes Store.

Deep inside the forest of Cloud, a little fox, under the nourishment of nature, gained human's form.
– Fox Spirit

When a fox reaches fifty, it gains human form; hundred as a young witch, able to divine.
– Poppy Fox

You will be stunned when she looks at you with its bewitching smile.
– Spring Pretty

Nikki found this pair of shoes in a Cloud cave. There seems to be something special about them.
– Poppy's Death

Talking about beauty and danger, fox spirit is the best answer.
– Poppy

Decorated with red cloud knots, it will show you a miraculous world after you beat it!
– Brocade Drum

The fox specter was said to be very charming, but nobody could see her well.
– Poppy Foxtail

Foxes normally gain human form once they are fifty years old. They become witches capable of divining once they are one hundred years old. Poppy Fox's descriptions tell the story of a young fox who gained human form. She has a bewitching smile and appeared as a charming specter. Later, while spelunking, Nikki found her shoes and thought there was something special about them.

Retrieved from "https://lovenikki.fandom.com/wiki/Poppy_Fox?oldid=144164"
Community content is available under CC-BY-SA unless otherwise noted.