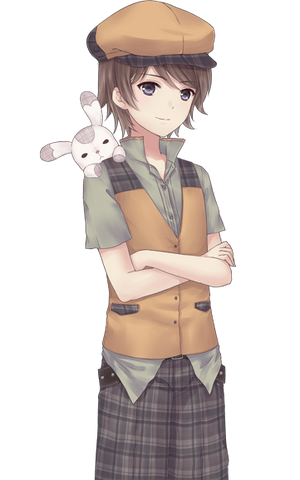 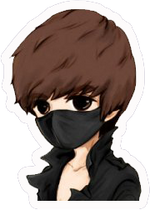 Nikki UP2U: The Romance of Mystery (2)

Polo is a character in Nikki UP2U: A dressing story and Hello Nikki-Let's Beauty Up. He was a friend of Nikki on Earth.

Polo has medium brown hair that covers his forehead and reaches his neck. In Hello Nikki, he wears a plaid and brown vest over an olive green short-sleeved shirt, and grey plaid pants. A stuffed bunny with patches on it sits on his shoulder.

Polo is a very forceful and determined person, but he has a soft side. He considers all of his bunnies his family, and he would do anything to protect them.

Polo was determined to investigate a murder, and believed Nikki to be the sole witness, as it happened in a park she was in while walking home from school. He followed her for several days before confronting her and demanding to know if she knew anything, but she hadn't heard or seen any murder. Polo insisted that she join the investigation in order to make up for not remembering anything.[1] Though she was reluctant at first, Nikki eventually became excited to help Polo in his quest. He revealed to her that he had three suspects, and that he wanted her help specifically because she was good at dressing up in order to go undercover.[2]

The first suspect was a man who lived a simple work and home life, and the only place to reach him was to go to the coffee house where he was a regular.[2] Polo said that since he couldn't dress up as a maid, Nikki had to be the one to do it, but he got annoyed when she reported back only about his skill in Fight the Landlord. However, Polo was pleased that she discovered he was in the store at the time of the crime.[3]

The second suspect was a kindergarten teacher, who Polo felt would be easy for Nikki to befriend.[3] When Nikki reported back that she was actually a nice woman, Polo insisted that she couldn't be fooled by appearances.[4]

The third suspect was, according to Polo, an athlete. However, when Nikki found him, it turned out he was not an athlete anymore and was eating at a BBQ restaurant. Polo was appeased when Nikki reported that he had been eating prawns at the time of the crime.[5]

Polo decided that the teacher must have committed the crime, so he ordered Nikki to get closer to her and find out more.[5] Nikki and the teacher attended a baking class and aquarium together, and Nikki began to feel bad about pretending to be her friend. She also ran out of money in order to investigate further, to which Polo sheepishly told her to just make do with what she had.[6] At the aquarium, Nikki managed to get a phone number, but was reluctant to call it. It was at this point that Polo told her that the victim was his family, and Nikki agreed then to call it.[7] From the call, Polo and Nikki discovered that the man was her new boyfriend and that she had spent the night of the murder with him.[8]

However, Polo's search was not over. He then accused Nikki of being the murderer, as she was there at the park that night as well. Nikki was taken aback and offended that he would accuse her after she helped him investigate.[8] Polo took her to see his rabbits in the hopes that it would "refresh her memory", and it was then that Nikki realized that the victim had actually been one of Polo's pet rabbits. However, he defended this, saying that the rabbits were truly like his family.[9]

Polo explained the entire situation then: that he had taken the rabbit, Bella, for a walk, but she had gotten lost. The three suspects were three people that lived in the same apartment building and disliked the rabbits. Nikki suggested that the rabbit could have tried to go back home by itself, which Polo agreed could have been a possibility. He realized that this left the kindergarten teacher as a suspect. Nikki told him that it was likely that the meal that the teacher's boyfriend had made was likely his rabbit. This left Polo distraught.[10]

Polo and Nikki formed an interesting friendship while trying to find the murderer to Polo's bunny Bella. Though he seemed to enjoy working with her, he was willing to turn on her when it seemed she was the only possible suspect left. He also pushed her into joining him in the first place. However, Nikki did not find Bella's death as sad as he did, telling him that he shouldn't be mad since it helped to create a beautiful memory for the couple that ate it.

Ingame artwork
Add a photo to this gallery

Retrieved from "https://lovenikki.fandom.com/wiki/Polo?oldid=133702"
Community content is available under CC-BY-SA unless otherwise noted.