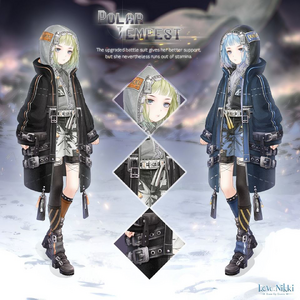 The upgraded battle suit gives her better support, but she nevertheless runs out of stamina.

Polar Tempest is a North suit that could be obtained during the Garden of Spiral Staircase Event.

Raging storm blocks her sight. She keeps driving back the enemies just to protect her precious friend.
– Gusty Night


The upgraded battle suit gives her better support, but she nevertheless runs out of stamina.
– Obsidian Vein


The crimson sun is slowly setting as darkness begins to take hold of the weak Freya.
– Sunset Ash


The last enemy falls, but there is no one by her side either. Falling tears freeze on her cheeks.
– Desolate Battlefield


The chasing enemies are right behind. She carries the injured comrade and hides in the forest.
– Firm Guard


She knows this plan would only work temporarily, but she has no choice. The howling wind scorns her.
– Piercing Storm

The comrade in her lap is losing body heat quickly. Freya tries her best to keep the injured comrade awake.
– Frosted Icefield


She takes off her temperature stabilizer and gives it to her comrade then charges into the storm alone.
– Azure Vein


Freya looks for the path to the forest outpost with difficulty. Enemies could arrive at any minute.
– Wasteland Smog


She is prepared for an enemy ambush. She leaps over obstacles swiftly and obtains the important healing potion.
– Reversing Expedition


Cannonballs rain down. She has no choice but to ignore her tearing wounds if she wants to make it back.
– Loyal Dependence


She repels all enemy assaults until reinforcements arrived. Her bravery is radiant like the first light of dawn.
– Polar Dawn

In Polar Tempest, a soldier named Freya found herself in an extremely difficult situation. While presumably fighting in guerrilla warfare, enemies were chasing right behind her and her injured friend. She carried her comrade and hid in the forest, trying her best to keep them awake. But the comrade in her lap was quickly losing body heat. She was running out of options; she came up with a plan that would only work temporarily, and she knew this full well. With the howling wind scorning her, she took off her temperature stabilizer and gave it to her comrade before charging into the storm alone.

Freya looked for the path to the forest outpost but because of the storm, it was difficult to see it. Enemies could arrive at any minute. Thus, she prepared for an enemy ambush; she leapt over the obstacles swiftly and obtained the important healing potion she needed. However, the enemy had cannonballs hailing raining down. If she wanted to make it back, she had no choice but to ignore her tearing wounds and fight. While her upgraded battle suit gave her better support capabilities, she was nevertheless running out of stamina. Even so, though, she managed to repel the enemy assaults enough for the reinforcements to arrive. Her bravery was radiant like the first light of dawn.

However, by the time the last enemy fell, Freya was weak and there was no one by her side, indicating that her friend did not make it. Thus, as the crimson sun set over the cold and desolate battlefield, the falling tears on her cheeks froze and the darkness began to take hold of her.

Retrieved from "https://lovenikki.fandom.com/wiki/Polar_Tempest?oldid=180416"
Community content is available under CC-BY-SA unless otherwise noted.