Poised Forest is a Story Suit that could be obtained from the Art of War Event.

The little girl couldn't see her dad often. And technically, she was not allowed to call him 'dad', but 'your majesty'.

One day, even her mother was gone. At first the girl asked the nanny about her mother over and over again, crying over her disappearance, but her sorrow was gradually washed away as time passed. She was just a child, after all.

It seemed to her that the world was limited inside the courtyard, and all she would meet in her life was just the nanny and maids.

Therefore, she was not prepared at all when the white-haired boy broke into her little world.

The girl hid herself behind the curtains, trying to peep at the boy talking with her nanny.

'That's a real poker face he's got', thought the girl.

She couldn't hear what they were talking about. Well, maybe she was just too young to understand it. All she could see was that her nanny got so nervous and knelt before the boy.

Then she saw him turn around and walk towards the curtains. Knowing that she was found, the girl crouched down at once and held the curtains tightly to cover her head. She could only hear her heartbeat and the footstep.

It got closer and closer until it reached her side.

Instead of pulling her out, the man out here just touched her head through the curtains.

The strength passed through the touch terrified the girl. All of a sudden she opened her eyes, and the tears finally dropped down.

As the boy left, the girl peeped behind the curtains again. Finding a view of his back, she took a few step to the door to see him off.

Since then, many people brought countless presents to visit the girl, but her nanny stopped all of them under 'Bai Yongxi's order'.

And later, 'Bai Yongxi', the white-haired boy, took the girl away. From his hand, she could [feel] the warmth her mother used to have.

Bai Yongxi told the girl that she would become the emperor one day, owning the whole country, so she must start to learn whatever it needs to manage the land.

Actually she didn't understand his words.

All she knew at her age was that 'As long as I stay on the tall chair and work hard at studying how to manage the country, Brother Bai Yongxi will stay by my side.'

He has always been busy, as she could see. The light at midnight in Wenying Hall and piles of files to be coped with on the table sufficed to show that.

Maybe I can help him with the burdens if I become the 'good emperor' he talked about?', thought the girl, but she never asked anyone about it.

She worked hard and gave it all she's got, but she's just a child after all.

Once she had trouble understanding a sentence in the book, even after asking Bai Yongxi three times, but she didn't feel like giving him any more trouble.

Right when the girl was distressed, a sage-like boy walked in. The whole room became refreshed as if it was decorated by the wind and the moon.

'Brother Immortal, you are finally here!' The girl jumped off her chair happily and ran to him with a book, 'I don't get this. Tell me about it.'

The boy held the girl in his arms and sat on the dragon throne, starting to explain the sentence patiently. The girl nodded as she listened.

'If only Brother Immortal could come more often. He knows really a whole lot ... well, not as much as Brother Bai Yongxi.'

Day after day, the girl thought this was what life was supposed to be, one common day after another.

However, these common days became a wild wish when she was locked in a dark room inside Jinlin Palace.

She screamed and cried, but the only response from outside was the crash of weapons.

Suddenly 'Brother Immortal' opened the door and walked in as usual, but something was actually different; he looked so miserable with all the wounds and blood on him. The girl held his arm tightly in case that he would fall to the ground at any time, but the boy just said something and pushed her to the door. She looked back while walking out of the room, with tears in her eyes.

'All I need is to do as Brother Immortal said, so he would get back on his feet, and Brother Bai Yongxi would come to save us, and the General would win the war, right? Right? Please let me know!' With her small figure covered by dazzles, the girl set her teeth and closed her eyes.

Bamboo leaves rustled in the breeze. Holding a golden bamboo rod, she came with moonlight and hovering eagle.
– Rushing Through Forest

The one in green walked through bamboo with a leaf in mouth. She looks leisure, but with fighting spirit.
– Bamboo Grove Opera

Selfless ones want more; war is more likely to rise in peace. Lin knows it, yet she still involved into war.
– Ordinary Life

The emperor was lost in a dream. He saw only towering trees. Lin was drunk and looked at the comer with mercy.
– Wild Bamboo Rain Hat

Young man broke out of the encirclement alone swiftly. The wounds of the young were still bleeding.
– Woods and Wine

Made of iron and jade, my rod can beat all enemies. It sounds like wind soughing in trees and shines coldly.
– Black Cloud Cane

Things of human mean nothing to Lin, but she still shed tears and blood. For she has the same feeling.
– Honest Heart Tested by Heaven and Ground

With tenderness and love, I couldn't sleep for I concerned about mortals. Their affection is so divine.
– Cold Woods and Snow

Lin watches the world from distance, singing elegies. She weeps for human. Her thoughts are like moonlights.
– Distant Wings 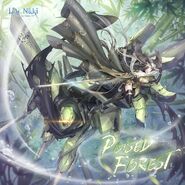 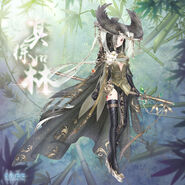 Retrieved from "https://lovenikki.fandom.com/wiki/Poised_Forest?oldid=123976"
Community content is available under CC-BY-SA unless otherwise noted.