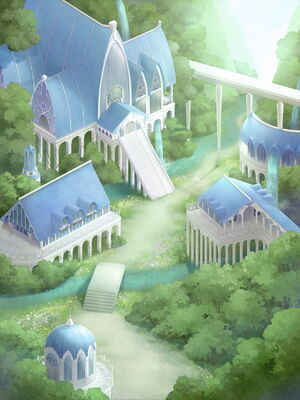 Pigeon Forest is a large forest in Pigeon Kingdom that is home to the Elves, as well as a number of other species such as the dwarves and formerly the Kindred.

The forest is secluded from the influence of the Pigeon cities and is covered by a misty haze.[5] Every winter it experiences snow, brought in by a wind called the White Wind.[6] The snow begins to melt around February.[7]

Some trees in the Pigeon Forest have tree spirits guarding them. The tree spirits live for a long time and hibernate during winter, as they have no resistance to cold.[14][15]

There is a manor on the edge of the forest, which has existed there for at least a hundred years, called the Wing Manor.[16]

The forest is said to be protected by gods, which is why the elves do not leave.[17] The God of Wind dwells deep in the forest.[18] Each season is also guarded by a powerful elf.[6][7]

War of Kindred and Elves Edit

Kindred and elves used to both occupy the forest together, with kindred living in the northern Pamir Forest. However, they did not get along, and this escalated when the elves planned an attack on the kindred. The Elven Queen, who did not want bloodshed, encouraged the Lord of Kindred to leave the forest. He opened the seal to Shadow City and took with him the rest of the kindred, including his own child with the Elven Queen, Cesare. The effort it took brought about his death, and though Cesare pleaded with his mother to do something when she said goodbye to him, she turned her back on the kindred for the sake of the elves and Pigeon Forest.[4]

Lake Bovaly is a massive lake in the center of Pigeon Forest. Chloris and Lakris both hibernate in a banyan tree at the north bank.[19][20]

It is also a link between the Pigeon Forest and the Shadow City, a dark, desolate underworld full of undead souls and Kindred.[21]

Stele Forest is a part of Pigeon Forest full of steles, which are slabs of stone that act as monuments and often have text inscribed. In Stele Forest, the steles record stories from long ago.[1] Rachel is the guardian of Stele Forest, and she considers each stele to be the "footsteps of their forefathers", which illuminate their way and carry the power of the Tree of Life.[22]

Pamir Forest is located in the north of the Pigeon Forest, north of Lake Bovaly.[23] It's known primarily for being where the god of the forest lives.[24] It's considered a dangerous and forbidden land, and the creatures who go there tend not to come back.[25]

In the year 60, the dwarf Babbi accidentally woke up Chloris early where he slept near Lake Bovaly.[26] Worried about Chloris' health, Babbi went to Pamir Forest in order to ask the god that lived there for the Fruit of the Holy Spirit, a legendary magic fruit that could heal any injury.[27] Chloris and Lakris followed him, recognizing that the forest is dangerous, and found him crying alone. They brought him back safely and explained that the Fruit of the Holy Spirit was just a myth.[28]

For thousands of years, a large mirror resided in Pamir Forest after its master discarded it there.[29][30] Chloris, while separated once "long long ago",[31] ended up in Pamir Forest, which was known to be a holy place. However, he noticed the entire forest was dead and ominous. He came across a tall mirror. Curious, he entered and found many missing creatures, such as a dwarf named Jones and a goblin named Penny.[23]

Chloris met the master of the mirror, a mirror elf named Eli, and learned that the missing creatures had been entering the mirror world and living in an illusion. He rescued Jones and Penny when Eli's control was weak, but he couldn't destroy the mirror due to the magic surrounding it.[30] He asked that Jones and Penny warn their people to stay away from the Pamir Forest so that the mirror would not claim any more victims.[32]

Every time Chloris woke up, he would go to the Pamir Forest and free anyone who had been caught in the mirror. By the year 680, word had spread far enough that nobody was lured into the mirror's illusion world.[33] When Chloris went to visit, Eli complained bitterly about how he was the only one trapped there now. Chloris took pity on him and gave him the opportunity to move to the southern forest, where he could be used to teach young elves about limits. Thus, the mirror was removed from Pamir Forest.[29]

Retrieved from "https://lovenikki.fandom.com/wiki/Pigeon_Forest?oldid=143763"
Community content is available under CC-BY-SA unless otherwise noted.