Phoenix Song is a Cloud suit that could be obtained via a recharge of 1,750

It's said that Qi is a master craftsman of instrument Ruan. She has made thousands of Ruans and has many fans.
– Broad Daylight

Qi heard that there is a 1000-year-old phoenix tree in Mountain Cloud. That would be perfect to make a zither.
– Rising Red Cloud

Mountain Cloud is covered in heavy mist all year round. Qi, charged by the zeal to find the tree, dives in.
– Mountain Clouds

While Qi is still buried in the music, some divine maidens in long dresses came in small steps.
– Elegant Steps

Ruan's sound can be as high as phoenix surges into the high sky and as low as flowers flow quiet water.
– Chasing Moon

The maidens holding flowers start dancing. With the company of dancing flowers and music, the girls look celestial.
– Cuff of Flowers

In the long night, it's very cold in the mountains. As the clear moonlight shines down, the forest is all quiet.
– Mortal Long Night

In the mist, an elegant figure appears. Holding a Ruan and wearing a gorgeous dress, her beauty is beyond words.
– Infinite Elegance

Still, the thousand-year-old phoenix tree cannot be found. She falls into sleep under a tree and enters dreamland.
– Trace of World

When asked where she came from, Qi assumes she must be a dream fairy and tells her everything.
– Waves and Clouds

Suddenly, the mist and cloud dissipate and only the moon shines in the sky, clear and brilliant.
– Speckless Moon

The fairy smiles and begins playing the zither. The sound is so clear that it can cleanse one's dusty heart.
– Clear Music

As the fairy plays the Ruan, the sonorous and harmonious zither entrances Qi into another world.
– Radiant Mist

As Qi is intoxicated in the zither and forgets to leave, a sudden cry of raven wakes her up. It's a dream!
– Slumber of Eons

What stands before her is a gigantic tree. Overwhelming height and exuberant vigor. It's the ancient phoenix tree!
– Tranquil Light

The dream is so true. After the Ruan is made, Qi names it Dream Fairy.
– Chant of Phoenix 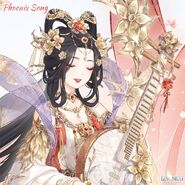 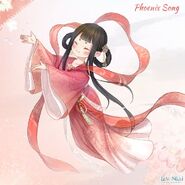 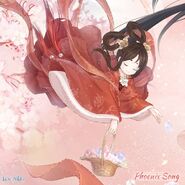 Retrieved from "https://lovenikki.fandom.com/wiki/Phoenix_Song?oldid=112987"
Community content is available under CC-BY-SA unless otherwise noted.