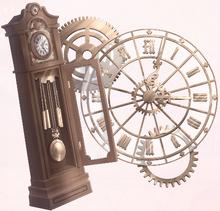 When the moon was hidden inside the dark, the waving pendulum drove the pointer towards midnight

Pendulum of Memory could be obtained from the Bell Tower Phantom Event and can now be obtained through Crafting.

A brown grandfather clock in front of a golden clock with roman numerals. There are two golden gears behind the golden clock.

The recipe can be claimed from the Time Diary.

Pendulum of Memory is part of the Pigeon suit Bell Tower Phantom.

Retrieved from "https://lovenikki.fandom.com/wiki/Pendulum_of_Memory?oldid=155957"
Community content is available under CC-BY-SA unless otherwise noted.