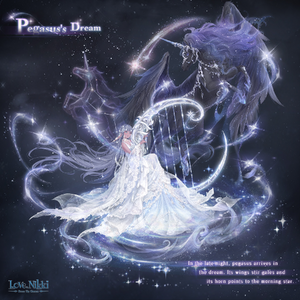 It's said that on the boundary of star sea live the pegasus. Noble and mysterious, they only stop for the purest girls.

Pegasus's Dream is a Pigeon suit that could be obtained via a Lucky Bags draw. The Starry Night Cruise skin was given to players in their mailboxes in April of 2020.

As the little princess of the tribe, Gina believes in the pegasus. She often goes to the forest to seek it.
– Chant of Freedom

Every girl has had dreams of pegasus. In the dreamy star sea, they ride the pegasus and fly freely in the cloud.
– Starry Imagination

It's said on the boundary of star sea live the pegasus. Noble and mysterious, they only stop for the purest girls.
– Mysterious Legend

Nobody knows where pegasus is, but people believe in them, the elusive but beautiful dreams.
– Remote Heavenly Sound

Lisa knits the headwear with the purest crystal. She believes handmade articles would show her skills best.
– Crystal Dream Talk

Gina travels and puts the souvenirs collected on her necklace. She believes it's out there somewhere.
– Trace of Starlight

Every pure soul will turn into an undying star that lights up the silent night and guides the way for the lost.
– Starry Night Cruise


The sisters wear the same braceler as a token. The road to the future may be long, but they will pray for each other.
– Twin Wishes


Gina returns from the journey and Lisa welcomes her back. By the bonfire, they play the harp under the starry sky.
– Crescent Zither


Time flies. Gina bid tribesmen goodbye and chose to live a life on the road to chase her dream.
– Azure Dream


The pegasus lets out a cry of excitement as Gina caresses its neck. Its eyes blink like it's ready for a trip.
– Voyage Chant


In the night, the Pegasus showers a rare meteor rain. Free souls soar into the high sky and gain new meanings.
– Pegasus Dream


Every shining spot is a unique star. The efforts made by the girls form this glittering star sea.
– Eternal Star Sea


Countless spots form a vortex beyond the star sea. Zither echoes in the sky. It's the beats of nature.
– Nebula Vortex


In the late night, pegasus arrives in the dream. Its wings stir gales and its horn points to the morning star.
– Phantom Figure


Every girl has a dream to encounter a pegasus. Beyond the remote dream, its sound echoes in the cosmos.
– Remote Dream


Lisa, the elder princess, expects to meet pegasus, so she plants a chrysanthemum on every morning and prays.
– Pious Heart


Life is long and Lisa is now an elder. One day, when she pushes open the window, she finally sees the pegasus.
– Dream Realized


The pegasus lowers its head and intimately rubs against Lisa's palm like it's just home from a long trip.
– Lucid Song


In the night, the Pegasus showers a rare meteor rain. Light souls soar into the high sky and meet in the star sea.
– Love for Pegasus

Retrieved from "https://lovenikki.fandom.com/wiki/Pegasus%27s_Dream?oldid=160668"
Community content is available under CC-BY-SA unless otherwise noted.