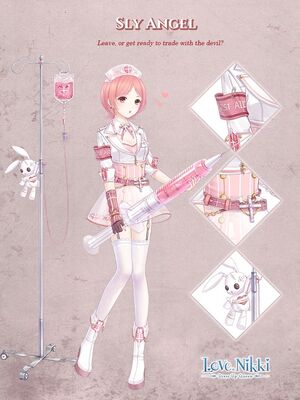 Peachy is a nurse who works for Gray Raven at the Sixth Clinic.

Peachy has a sugary-sweet personality, always acting nice despite the fact that she works for the notoriously dangerous Sixth Clinic.[1]

Peachy was born in Apple, and lived in Losol until she was adopted by the Gray Raven. He offered her anything she wanted, and she asked if that meant she could ask for him to be her boyfriend. However, it is most likely that he refused since she introduces herself by saying she is single.[1]

Peachy began to work for Gray Raven, and her duties included greeting people and helping them decide what they wanted from him.[1][2]

Retrieved from "https://lovenikki.fandom.com/wiki/Peachy?oldid=101794"
Community content is available under CC-BY-SA unless otherwise noted.