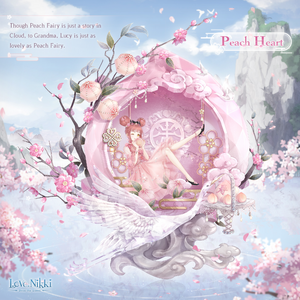 Peach Heart is a Cloud suit that could be obtained via a Lucky Bags draw.

Lucy has been dreaming to be a designer. She often imagins to hold a personal exhibition on the City Square of Welton!
– Crimson Dress

Grandma once told Lucy that the peach of Peach Fairy has the effect to extend your life.[1]
– Old Story of Peach

Lucy is still busy working around the new year. On the bustling street, a peach tree is standing in the cold wind.
– Cold Spring

Maybe Lucy has been inspired by the hometown, modern Cloud elements can always be found in her works.
– Cloud New Wind

Lucy is not satisfied with this. She's been thinking of doing something for grandma who brought her up.
– Crystal Peach

The girl in the pink peach dress looks like fresh sweet fruit. She smiles and gives her family best wishes.
– Pink Peach

Though Peach Fairy is just a story in Cloud, to Grandma, Lucy is just as lovely as Peach Fairy.
– Peach Heart

On the birthday of grandma, Lucy returns to hometown with a gift she made herself.
– Auspicious Peach

It's a delicate peach ornament made of lucent pink crystal that symbolizes longevity.
– Peach Branch

The story of Peach Heart revolves around Lucy, a girl from Lotus Town. It is located on the southwestern part of Cloud Empire, very close to Apple Federation. She dreamed of becoming a designer, often imagining holding her own personal exhibition on the City Square of Welton. Modern Cloud elements could always be found in her works, which brought the question whether she was inspired by her hometown. She had been working on a design but was not satisfied; she had been thinking of doing something for her grandma who brought her up. While she was still busy working around the new year, she spotted a peach tree standing on the bustling street, the cold winds blowing. Her grandma had told her that the peach of Peach Fairy had the effect of extending your life. Thus, she created a pink dress which looked like fresh sweet fruit. Dressed, she smiled and gave her family best wishes.

On her grandma's birthday, Lucy returned to her hometown with a gift she made herself. It was a delicate peach ornament made of translucent pink crystal, symbolizing longevity. The story of Peach Fairy was just a story in Cloud, but to Grandma, Lucy was just as lovely as the Peach Fairy.

[1] In Chinese mythology, Peaches of Immortality are consumed by the immortals due to their mystic virtue of conferring longevity on all who eat them. Peaches symbolizing immortality (or the wish for a long and healthy life) are a common symbol in Chinese art, appearing in depictions or descriptions in a number of fables, paintings, and other forms of art, often in association with thematically similar iconography. 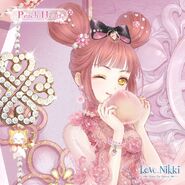 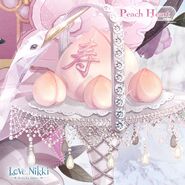 Special background.
Add a photo to this gallery

Retrieved from "https://lovenikki.fandom.com/wiki/Peach_Heart?oldid=136815"
Community content is available under CC-BY-SA unless otherwise noted.