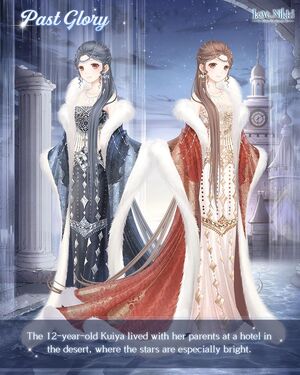 The 12-year old Kuiya lived with her parents at a hotel in the desert, where the stars are especially bright.

Past Glory is a Pigeon suit that can be obtained from the Time Palace Event.

Born to a common family in Pigeon Kingdom, Kuiya followed her merchanting parents across the Miraland.
– End of the Day

The 12-year-old Kuiya lived with her parents at a hotel in the desert, where the stars are especially bright.
– Gold Glaze

A pair of wineglasses at the hotel hall intrigued Kuiya. They were like a river reflecting the star's shadow.
– Past Glory

Kuiya held the glass and watched the moon through it but broke it while putting it back onto the table.
– Time Pass as Clouds Move

When Kuiya is helpless, hotel owner's son Kulkan shows up. She wants to explain, he pushes her into the room.
– Heaven's Light

Kulkan shut the door, leaving Kuiya in the dark room. As she was about to scream, she heard the owner's voice.
– Pearly Luster

Scolded by father, Kulkan takes it silently. The rebuke ends and the hotel owner leaves. It is quiet outside.
– Twilight Sun Light

Kuiya opens the door and sees someone's back. She asks, shaking, and Kulkan turns around, smiling lovingly.
– Rising Moon

While leaving, Kuiya held Kulkan's hands and promised him a pair of glasses, like the one she had shattered.
– Silver Glaze

Kuiya became an apprentice of glaze craftsmen after going back. She worked the hardest and her work paid off.
– Past Glory-Night

A picky customer asked for a pair of glasses at Kuiya's party. The kind that Kuiya was the proudest of.
– Time Pass as Clouds Move-Night

Kuiya and Kulkan married in a tent in early spring. The wine glass reflects her rosy cheeks and his eyes.
– Heaven's Light-Night

Past Glory is about a girl named Kuiya, who is from a common family in the Pigeon Kingdom. Her family were travelers, and they lived in a hotel in the desert.

One day, Kuiya saw a pair of enchanting wineglasses. She picked one up to admire it, but broke it when she put it back. She didn't know what to do, but the hotel owner's son, Kulkan, showed up and shut her in a room.

She was confused, but she suddenly heard the voice of the hotel owner. He scolded Kulkan, who silently took all the blame for the broken wineglasses. Once the owner left, Kuiya opened up the door and thanked him, and he smiled at her lovingly.

When Kuiya left the hotel, she held Kulkan's hands and promised to replace the wineglasses one day. She then became the apprentice of a glaze craftsman and worked hard to learned how to make wineglasses.

Kuiya and Kulkan ended up getting married. Their wedding was held in early spring in a tent under the starry sky. It's implied by the presence of a wine glass at the wedding that Kuiya was able to make wine glasses for Kulkan.

Retrieved from "https://lovenikki.fandom.com/wiki/Past_Glory?oldid=132589"
Community content is available under CC-BY-SA unless otherwise noted.