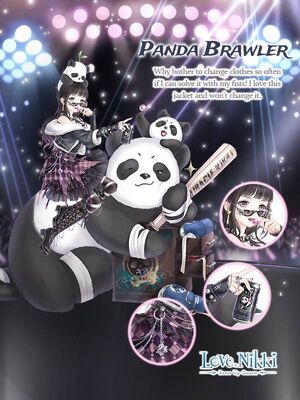 Why bother to change clothes so often if I can solve it with my fists! I love this jacket and won't change it.

Panda Brawler is an Apple suit that can be obtained from Lucky Bags from September 25th to October 12th, 2018.

She was born manic and doesn't like ordinary life. She was coded 'Grappler' by observers.
– Mixed Gene

Good at boxing, free combat... 'Grappler' has strong arms. She is a great object of observation.
– After-Drinking Mischief

The experiment is called 'Kill and escape'. She can always win, as if she is bestowed with special powers.
– Dark Energy

Every experiment tests match and physical ability. Observers wonder which methods she relied on more to win.
– Confusing Sight

'She can't escape from the curse of her blood and has higher pain threshold than average. Is she a fool?'
– Unstable Factor

30 minutes to experiment. She rolled with the panda, then sit still suddenly, and made faces to the camera.
– Restless Link

The 'Grappler' has no human friends. Papa has a good temper. It either eats or sleeps... sometimes drinks.
– Cute Baba

The aggressive expression in her eyes can be seen through her sunglasses which she used as a weapon.
– Penetrating Eyes

She wore shiny metal earrings while humming. She had to pick cute ones before her ears recover.
– Alloy

She was coded Grappler, and ranked the highest hazard class. 'Keep eyes on all her behaviors to avoid damage.'
– Destroyer

'Take in sugar after sports.'The observer scored out the note. 'The Grappler healed faster due of sugar.'
– Sweet Lollipop

'Grappler' is an alcoholic, but temperance is not advised. Her numb nerves fitted her for fight.
– Panda Beer

She was drunk, dozing on her friend's furry back. The panda patted her untidy hair and gave a beer burp.
– Ready to Battle

Why are you staring at me? There is no scar on my face. Oh, I see. You want to fight with me!
– Grappling Invitation

Admit defeat! I need to dye my hair black, or maybe the panda will not recognize me.
– Twisting Gradual Change

Why bother to change clothes so often if I can solve it with my fists! I love this jacket and won't change it.
– Wilfull Obsession

The suit tells the story of 'Grappler', a girl who is part of an experiment. Though she, like other residents of Miraland, is subject to the Blood Curse that causes her to feel pain every time she uses violence, she is a boxer. According to the story, she was born manic and doesn't like ordinary life. She believes styling battles are ridiculous, saying that she likes her jacket and doesn't want to change it when she can use her fists instead.

She has no human friends, only her panda friends such as Baba (or Papa). She is also an alcoholic, and because of this her nerves are numb, allowing her to fight. She also uses her sunglasses as a weapon.

The experiment means she is constantly monitored by observers, and they have ranked her as the highest hazard class. They notice that she heals better when given sugar, hence the lollipop. For her fights, the observers try and figure out what methods are the most effective.

Retrieved from "https://lovenikki.fandom.com/wiki/Panda_Brawler?oldid=132586"
Community content is available under CC-BY-SA unless otherwise noted.