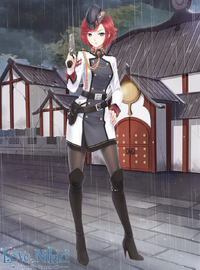 Officer in the League Till Army

Ozeca is an officer in the Snow Eagle Legion in League Till, Nidhogg's North army. She is from White Rock City in North Kingdom.[2]

Ozeca wears clothing typical of an officer, and has short, bright red hair; and purple eyes. She usually has a severe, intimidating and wary expression on her face.

Ozeca, like Nidhogg, is often impatient and has little time for chit-chat and games.[1] Described as "war-hungry", she takes war seriously and believes commitment is important. She also believes in the blood curse providing a false peace, same as Nidhogg.[3]

Ozeca was originally from White Rock City, and a Frost Hawk soldier. But at some point, she left.[2]

Ozeca refused to let Nikki and her friends pass her into Cloud City until they beat her in a styling battle. She was identified as a member of Snow Eagle Legion in League Till, though Bobo believed she did not deserve to be a part of something named after the legendary and historical Snow Eagle Revolutionary Force. Ozeca told them to stop talking about the history and battle her.[1]

When members of Iron Rose showed up to assist Nikki with the Dawnblade, Ozeca mocked Elle, saying that she didn't know what war is like and that she was used to a life of relaxation. Ransa threatened her, telling her not to forget how she offended the queen, before Nikki went on to battle Nidhogg.[4]

After the battle, she asked Nidhogg why he let Nikki and her friends go. He said it's his own business. She offered him the No. 7 Reagent, which could reduce his pain from the blood curse, but guessed that he did not need it after all. She then asked if they should contact "him", but Nidhogg said he will arrange it himself.[5]

Retrieved from "https://lovenikki.fandom.com/wiki/Ozeca?oldid=101793"
Community content is available under CC-BY-SA unless otherwise noted.